*Notes from a lesson I did on the doctrine of humanity.

1.     Genesis 1 and 2: Implications and applications of being created beings[1]

a.     Humans have no independent existence

i.     Created by the will and design of God

o   Francis Schaeffer Pollution and the Death of Man:

As a Christian I say, “Who am I?”  Am I only the hydrogen atom, the energy particle extended?  No, I am made in the image of God.  I know who I am.  Yet, on the other hand, when I turn around and face nature, I face something that is like myself.  I, too, am created, just as the animal and the plant and the atom are created.  (p. 30)

Therefore, intellectually and psychologically, I look at these animals, plants, and machines, and as I face them I understand something of the attitude I should have toward them.  I begin to think differently about life.  Nature begins to look different.  I am separated from it, yet related to it.

Notice the phrase “intellectually and psychologically.”  This is a very important distinction.  I can say, “Yes, the tree is a creature like myself.”  But that is not all that is involved.  There ought to be a psychological insight, too.  Psychologically I ought to “feel” a relationship to the tree as my fellow-creature.  It is not simply that we ought to feel a relationship intellectually to the tree, and then turn this into just another argument for apologetics, but that we should realize, and train people in our churches to realize, that on the side of creation and on the side of God’s infinity and our finiteness we really are one with the tree! (p. 31)

Christians, of all people, should not be the destroyers.  We should treat nature with an overwhelming respect.  We may cut down a tree to build a house, or to make a fire to keep the family warm.  But we should not cut down the tree just to cut down the tree.  We may, if necessary, bark the cork tree in order to have the use of the bark.  But what we should not do is to bark the tree simply for the sake of doing so, and let it dry and stand there a dead skeleton in the wind.  To do so is not to treat the tree with integrity.  We have the right to rid our houses of ants; but what we have not the right to do is to forget to honor the ant as God made it, in its rightful place in nature.  When we meet the ant on the sidewalk, we step over him.  He is a creature, like ourselves; not made in the image of God, but equal with man as far as creation is concerned.  The ant and the man are both creatures.  (p. 43)  (The Complete Works of Francis Schaeffer--vol. 5 [Crossway, 1982])

c.      Humans are unique in creation à “more to humanity than just creature-hood” 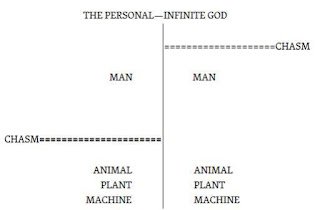 d.     There is kinship among humans-- we should care for humanity as a whole and for those we do not personally know

e.     Humanity is not the highest object in the universe

“His [God’s] glory, not our pleasure and comfort, is the ultimate value.  We must never elevate our respect for humans to the point of virtually worshipping them.”[2]

f.      There are definite limitations upon humanity

i.     Humility due to our finitude

1.     Experience at U of AZ library-- welling up; not able to master one philosopher (Kant) much less all of them

ii.     Only God is inherently eternal à all else dies

g.     Limitation is not inherently bad-- not something to “grow/evolve beyond”

h.     Should accept our own finitude to properly live life

“The fact of our finiteness is clear.  We may, however, be unwilling to accept that fact and to accept our place in the scheme of things as creatures of God who are dependent upon him.  Adam and Eve’s fall consisted at least in part of an aspiration to become like God (Gen. 3:4-6), to know what God knows.  A similar aspiration underlay the fall of the evil angels (Jude 6).  We ought to be willing to let God be God, not seeking to tell him what is right and true, but rather submitting to him and his plan for us.  To pass judgment on God’s deeds would require an infinite knowledge, something that we simply do not have.”[3]

i.     It will probably amaze us to realize that when the Creator of the universe wanted to create something “in his image,” something more like himself than all the rest of creation, he made us…We are the culmination of God’s infinitely wise and skillful work of creation.[4]

c.      Some have denied that post-Fall people are in the image of God-- the image has been lost and is only renewed in coming to Christ Jesus

i.     But see: Genesis 9.6 and James 3.9-- post-Fall situations that do not restrict image to believers

d.     Structural and Functional (or, broader and narrower) aspects of image

i.     Structural: “In sum, then, we may say that by the image of God in the broader or structural sense we mean the entire endowment of gifts and capacities that enable man to function as he should in his various relationships and callings.”[5]

ii.     Functional: “Thus the image of God in the narrower sense means man’s proper functioning in harmony with God’s will for him.”[6]

1.     Resemblance: human beings like God in some aspect(s) such as intellect, moral sense, will, rationality, etc.

3.     Relational: humans as male/female and in community as they manifest the “image of God”

·      Scholars commonly speak as if these categories are mutually exclusive.  My view is that the linguistic and exegetical details favor the idea that “in our image, after our likeness” implies that humans were made with some kind of resemblance to God, which was to enable them to represent God as benevolent rulers, and to find their fulfillment in their relationships with each other and with God.  That is, I have combined all three views,…[8] 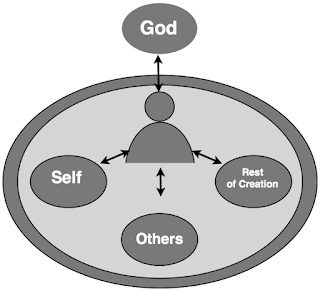 ii.     Man is called to “work” the earth in order to uncover the rich potentialities “hidden,” as it were, beneath the earth’s surface.  On the most basic, agricultural level, man cuts into the earth and sows seed, which grows up into plants, which when carefully tended yield fruit in their appointed seasons.  Dig deeper and the earth will yield still more riches: precious stones and gold (Gen. 2:11-12; Job 28); ore which can be smelted to make metals; and basic chemical raw materials which can be synthesized into pigments and dyes for art works, fertilizers to increase crop yields, or rocket fuel to explore God’s vast universe.  Other parts of the creation can be transformed as well: wood can be fashioned into flutes for the praise of God or timbers for building; stones can be dressed and fitted into walls, etc.[9]

ii.     We are to take care of the created order; protection—not exploitation

iii.     See my essay “Habakkuk and God’s Concern for the Environment”[10]

5.     Humanity as God’s image-bearers to rule in the world

“In the ancient East the setting up of the king’s statue was the equivalent to the proclamation of his dominion over the sphere in which the statue was erected (cf. Dan. 3.1, 5f.).  When in the thirteenth century BC the Pharaoh Ramesses II had his image hewn out of rock at the mouth of the nahr el-kelb, on the Mediterranean north of Beirut, the image meant that he was the ruler of this area.  Accordingly, man is set in the midst of creation as God’s statue.  He is evidence that God is Lord of creation; but as God’s steward he also exerts his rule, fulfilling his task not in arbitrary despotism but as a responsible agent.  His rule and his duty to rule are not autonomous; they are copies.”[11]
[1] Primarily from Millard Erickson Christian Theology (3rd ed.), pp. 451-455.
[2] Millard Erickson Christian Theology, 453.
[3] Millard Erickson Christian Theology, 455.
[4] Wayne Grudem, Sytematic Theology (Grand Rapids: Zondervan, 1994), 449.
[5] Anthony Hoekema, Created in God’s Image (Grand Rapids, Mich.: Eerdmans, 1986), 70-71.
[6] Hoekema, Created in God’s Image, 72.
[7] Hoekema, Created in God’s Image, 64.
[8] C. John Collins. Did Adam and Eve Really Exist?  Who They Were and Why You Should Care (Crossway, 2011), p. 94.  See also Herman Hoekema’s discussion of “structural” and “functional” aspects of the image of God in Created in God’s Image (Eerdmans/Paternoster, 1986), pp. 68-73.
[9] David Bruce Hegeman, Plowing in Hope: Toward a Biblical Theology of Culture (Moscow: Canon Press, 1999), 45.
[10] Available online: http://whiterosereview.blogspot.com/2011/11/habakkuk-and-gods-concern-for.html.
[11] Hans Walter Wolff as quoted in Peter J. Gentry and Stephen Wellum, Kingdom Through Covenant: A Biblical-Theological Understanding of the Covenants (Wheaton, Ill.: Crossway, 2012), 200.
Posted by Richard Klaus at 10:28 PM