Dr. Vern Poythress has a new book coming out early 2019.

Interpreting Eden: A Guide to Faithfully Reading and Understanding Genesis 1-3 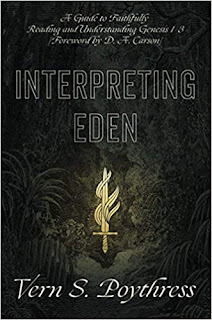 A number of Poythress' articles on the topic of the book have been published in the Westminster Theological Journal.  Here are some of the articles:

Rain Water Versus a Heavenly Sea in Genesis 1:6-8

Correlations with Providence in Genesis 1

Adam Versus Claims from Genetics

A Misunderstanding of Calvin's Interpretation of Genesis 1:6-8 and 1:5 and Its Implications for Ideas of Accommodation

Posted by Richard Klaus at 8:07 PM

* The following was a handout I wrote for a brief presentation in a Philosophy 101 class.

b.     Storyline of the Bible: narrative arc

·      A linear view of history: “History is not reversible, not repeatable, not cyclic; history is not meaningless.  Rather, history is teleological, going somewhere, directed toward a known end.”[3]

c.      According to Christianity: Jesus Christ is the centerpiece of the biblical narrative

i.     Religious devotion but also…

ii.     Jesus is the final and teleological purpose of all revelation

iii.     Jesus sparked a hermeneutical revolution in regards to interpreting the Old Testament[4]

3.     Creation—humanity as created by God

i.     Process is not specified

ii.     Creator/creature distinction: there is a metaphysical chasm between the Creator and that which he creates

1.     Resemblance: human beings like God in some aspect(s) such as intellect, moral sense, will, rationality, etc.

3.     Relational: humans as male/female and in community as they manifest the “image of God”

·      Scholars commonly speak as if these categories are mutually exclusive.  My view is that the linguistic and exegetical details favor the idea that “in our image, after our likeness” implies that humans were made with some kind of resemblance to God, which was to enable them to represent God as benevolent rulers, and to find their fulfillment in their relationships with each other and with God.  That is, I have combined all three views,…[5]

c.      Some other elements of humanity…

i.     Finite and dependent
ii.     Morally accountable
iii.     Material being animated by spirit (dualist conception)[6]
iv.     More valuable than other created animals; yet responsible for the rest of creation
v.     Social creatures

a.     Gendered distinctions between sexes

b.     Sex: procreative and unitive

4.     Fall—alienation: the problem of humanity

a.     Four-fold rupture in humanity’s relationships: alienation from…

b.     Consequences: alienation and cursed

c.      The image of God is not completely erased or lost >> but it is distorted

a.     Old Testament—redemption promised and illustrated

i.     Election and mission: particularity for the sake of universality

iii.     God chooses Israel as a special people:  to manifest God’s character to the nations (Deuteronomy 4.5-8)

·      Special laws that mark them out as the people of God and manifest a distinct identity (example: Leviticus 19.19)

v.     Much of the Old Testament is taken up with narrating the failure of Israel and its institutions to fulfill their task of being a light to the nations and the subsequent judgment of God upon his people.

b.     New Testament—redemption accomplished and fulfilled

i.     Jesus Christ is the central character of the New Testament

iii.     Early church: portrait of its life, teaching, and mission in the rest of the New Testament (Acts, and Letters)

·      Central message is Jesus’ death and resurrection as the focal point of redemption
·      New community is formed around this belief and experience (the “church”)
·      These followers of Jesus are to manifest the life of God through Christ to the nations—to be the light of the world (Matthew 5.14-16)
·      Wait for the return of Christ while manifesting the reality of the Kingdom of God here and now in their beliefs and lifestyles

·      Greatest commandment—“Love God and love your neighbor” (Mark 12.28-31—Jesus is quoting Deuteronomy 6.5 and Leviticus 19.18)
·      As the Jesus message-movement moves out into the nations beyond Israel there is an increasing challenge to bring the new converts into ethical alignment with behavior consistent with the message of Jesus
·      Example à sexual ethics

a.     NT is not anti-sex
b.     NT does place sexual intercourse in a tightly regulated sphere
i.     Marriage between one man and woman
ii.     Out of bounds: fornication, adultery, homosexuality, prostitution (1 Corinthians 6.15-20)

a.     Resurrection is the great future-oriented hope for Christians

ii.     “Heaven” is not a disembodied eternal state

b.     Resurrection has reference to the entirety of the created order—it will be renewed and set free from its curse and “groaning” (Romans 8.18-22)

a.     Created in the image of God to rule and reign in communion with God over God’s creation

b.     The Fall brings disruption and death at every level of humanity

c.      Redemption is God’s gracious program to reunite humanity to himself and institute his wise and kind rule over the earth (“the kingdom of God”)

d.     Redemption finds its ultimate fulfillment in Jesus Christ who is both God and man.  He is, thus, the mediator between God and humanity.  His death and resurrection is the great redemptive event in the entirety of the Bible

e.     God will restore all things and bring resurrection power to bear in transforming his people and the rest of the created order into the fullness of his righteous rule on earth.  Those who are Christ’s people by belief and allegiance to him will rule and reign with Christ forever.

[1] The issue of which books belong in the Bible is referred to as the canon.  For an introductory study on this issue see my “The Canon of Scripture: A Brief Introduction.” Online: http://whiterosereview.blogspot.com/2015/09/the-canon-of-scripture-brief.html.
[2] Chart is taken from Paul D. Wegner, “How Did We Get the Old Testament?” Credo Magazine (February 2015), 20.  Available online at: www.credomag.com.
[3] James W. Sire, The Universe Next Door: A Basic Worldview Catalog—5th ed. (Downers Grove, Ill.: Intervarsity Press, 2009), 43.
[4] For some brief comments on this see my essay “The Apostle Paul as the Isaianic Servant: Paul’s Use of Isaiah 49.6 in Acts 13.47.”  Online: http://whiterosereview.blogspot.com/2013/04/the-apostle-paul-as-isaianic-servant.html.
[5] C. John Collins. Did Adam and Eve Really Exist?  Who They Were and Why You Should Care (Crossway, 2011), p. 94.  See also Herman Hoekema’s discussion of “structural” and “functional” aspects of the image of God in Created in God’s Image (Eerdmans/Paternoster, 1986), pp. 68-73.
[6] This dualist conception of humanity is more clearly seen with the further revelation in the New Testament.
[7] Chris Wright, Knowing Jesus Through the Old Testament: Rediscovering the Roots of Our Faith (London: Marshall Pickering, 1992), 31.
[8] See my short pieces on this aspect of the identity of Jesus: “Old Testament Quotations in Matthew 2: Some Comments,” online: http://whiterosereview.blogspot.com/2013/12/old-testament-quotations-in-matthew-2.html and “Jesus and Israel Parallels,” online: http://whiterosereview.blogspot.com/2013/10/jesus-and-israel-parallels.html. 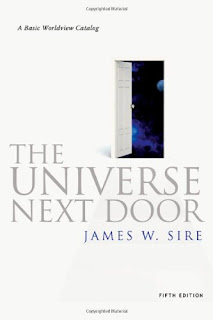 The first chapter laying out the worldview questions and then almost all of chapter 2 on Christian Theism is on Google Books for preview.

A comparison chart for Sire's book is HERE.