The Difficult Doctrine of the Love of God

* A selection from D. A. Carson's wonderful little book The Difficult Doctrine of the Love of God. 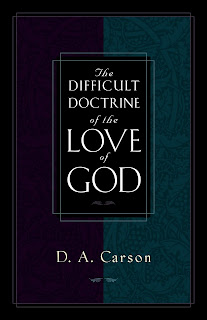 If people believe in God at all today, the overwhelming majority hold that this God—however he, she, or it may be understood—is a loving being. But that is what makes the task of the Christian witness so daunting. For this widely disseminated belief in the love of God is set with increasing frequency in some matrix other than biblical theology. The result is that when informed Christians talk about the love of God, they mean something very different from what is meant in the surrounding culture. Worse, neither side may perceive that that is the case.
….

To put this another way, we live in a culture in which many other and complementary truths about God are widely disbelieved. I do not think that what the Bible says about the love of God can long survive at the forefront of our thinking if it is abstracted from the sovereignty of God, the holiness of God, the wrath of God, the providence of God, or the personhood of God—to mention only a few nonnegotiable elements of basic Christianity.

The result, of course, is that the love of God in our culture has been purged of anything the culture finds uncomfortable. The love of God has been sanitized, democratized, and above all sentimentalized. This process has been going on for some time. My generation was taught to sing, “What the world needs now is love, sweet love,” in which we robustly instruct the Almighty that we do not need another mountain (we have enough of them), but we could do with some more love. The hubris is staggering.

It has not always been so. In generations when almost every- one believed in the justice of God, people sometimes found it difficult to believe in the love of God. The preaching of the love of God came as wonderful good news. Nowadays if you tell people that God loves them, they are unlikely to be surprised. Of course God loves me; he’s like that, isn’t he? Besides, why shouldn’t he love me? I’m kind of cute, or at least as nice as the next person. I’m okay, you’re okay, and God loves you and me. (pp. 9-12)
Posted by Richard Klaus at 9:41 PM

Email ThisBlogThis!Share to TwitterShare to FacebookShare to Pinterest
Labels: D. A. Carson, Love

Living in an Alien Culture: Daniel 3

Living in an Alien Culture
Daniel 3

§ Taking the vessels of the house of God (1.1) and putting them with other artifacts

o   “The fact that all peoples, nations and languages were to fall down and worship it suggests that Nebuchadnezzar intended to unite his kingdom under one religion.”[2]

·     Soil #2: “affliction or persecution arises because of the word” (THREAT)

·     Soil 3: “the worries of the world, and the deceitfulness of riches, and the other desire for other things” (SEDUCTION)

o   Temptation to rationalize away the challenge

§ “We all know that this idolatry is bogus—there is nothing real in it except the emperor wishing us to acknowledge his authority.  What does it matter if we outwardly bow down to him?  It doesn’t mean that the controls our heads and our hearts.  And if good men like you three—men of proven ability and integrity—refuse to bow down and get killed, that will make the situation even worse.  You are top people; if you are not there to continue your powerful influence for good at the very highest levels of the state, what hope is there for the rest of us?  And think of your wife and your children.  What are they going to do if you throw your life away like this—needlessly?  No, you must take part in the ceremony like everyone else for our sakes. We need you there in the corridor of power.”[4]

o   Nebuchadnezzar’s question: “What god is there who can deliver you out of my hands?”

§ Called “the heart of the theological teaching of the chapter”[5]

§ Nebuchadnezzar has recognized Yahweh as a God ofwisdomand knowledge(2.47) but now he must learn he is the God of power.

§ “By contrast, it is only the true God who can proclaim that ‘no one can deliver out of my hand’ (Deut. 32:39).  And this great God was a proven deliverer.  After all, when he rescued his people from Egypt centuries before, Moses told the Israelites that it was God who ‘brought you out of the iron-smelting furnace, out of Egypt, to be the people of his inheritance, as you now are’ (4:20).”[6]

§ Rather, an absolute rejection of idolatry

§ “Sometimes, when the story of Daniel’s three friends’ deliverance from the furnace is explained, the impression is given that because God eventually rescued them and they were found to be unhurt they did not suffer.  A moment’s thought, however, will show us that this is far from the case.  They suffered—not in the furnace, but before they were thrown into it. They were human beings like the rest of us, presumably with families, and so, from the moment the edict was announced by the emperor, these men inevitably went through mental agony.

“It would have been immediately obvious to them that this was the hardest test of loyalty to God they had ever faced.  Indeed, it was the hardest test anyone could face.  It was the ultimate value decision.  On the one side of the equation was position, family, wealth, security, life itself; and on the other side there was God.”[7]

o   They don’t dictate to God the outcome; they leave it in his hands

§ Deliverance or not (from the furnace), they will not compromise their loyalty to God

o   Sometimes the righteous suffer all the way to death

o   Nebuchadnezzar’s policy is so overblown it hurts his own people (v. 22)

o   Examples from Mark of challenging situations where the glory of Jesus Christ is manifested:

·     Their faithfulness brings protection to the rest of God’s people

§ “In all non-Christian systems, the source of ethics and of law is the state; it is the polis, the empire, or the kingdom… Either God is the true source of morality and law, or the state is.”[8]

§ What happens when the State refuses to recognize a transcendent law?

§ God made man and woman, their covenantal union in marriage, and the fruit of that union.

o   The concept of marriage

o   The structural integrity of the family

§ Who do they belong to?  Parents or the State?
§ Abortion
§ The Benedict Option: A Strategy for Christians in a Post-Christian Nationby Rod Dreher (2017)

·     “Post-Obergefell, Christians who hold to the biblical teaching about sex and marriage have the same status in culture, and increasingly in law, as racists.” (p. 3)

·     “There is no other area in which orthodox Christians will have to be as countercultural as in our sexual lives, and we are going to have to support each other in our unpopular stances.” (p. 196)

Some thoughts on marriage and parenthood[10]

b.    What view it has embraced

* And… what are the implications and consequences

a.    Consent-based: “The consent-based view of marriage is primarily about an intense emotional union—a romantic, caregiving union of consenting adults.”[11]

§ An institution ordered toward children.

“The right to marry thus dignifies couples who ‘wish to define themselves by their commitment to each other.’ Marriage responds to the universal fear that a lonely person might call out only to find no one there.  It offers the hope of companionship and understanding and assurance that while both still live there will be someone to care for the other.” (p. 14)

“This universal definition of marriage as the union of a man and a woman is no historical coincidence.  Marriage did not  come about as a result of a political movement, discovery, disease, war, religious doctrine, or any other moving force of world history—and certainly not as a result of a prehistoric decision to exclude gays and lesbians.  It arose in the nature of things to meet a vital need: ensuring that children are conceived by a mother and father committed to raising them in the stable conditions of a lifelong relationship.” (pp. 4-5—also see Justice Alito’s dissent pp. 3-4)

3.    Consequences of the Consent-based view of marriage for parents and children

·     Neither is biology the deciding factor for parenthood

“The underlying reason is clear: When same-sex couples have children—whether by divorce, adoption, or third-party reproduction—those children are not biologically related to one or both parents.  Therefore, if same-sex parents are to have the same legal status as heterosexual parents, logically the state must erase the assumption of natural parenthood based on biology.

“The definition of parenthood must be de-naturalized.”[14]

“However, if parenthood is detached from biology, then the state will define parenthood for allchildren.  The state will decide who counts as a parent.  Instead of recognizing parenthood as a pre-political reality that is logically prior tothe state—which the state is morally obligated to respect—parenthood will be treated as something created bythe state.

“And if parenthood is created by the state, then the state has the right to define and control it.  It will be much easier for state authorities to intrude into the family, make decisions about how children are raised and educated, or even take them away if state officials disagree with their parents’ beliefs.  Jennifer Roback Morse predicts that ‘natural biological relationships will be systematically and routinely overridden by socially constructed government-created relationships.’

“Thus a de-naturalized definition of marriage leads inevitably to a de-naturalized definition of parenthood.  ‘Civil marriage provides the entire basis for presuming the rights and responsibilities of biological parents to raise their own children,’ Morabito explains.  ‘If we abolish civil marriage, these will no longer be rights by default, but rights to be distributed at the pleasure of a bureaucratic state.’

“In this way, paradoxically, a choice-based model of the family ends up empowering the state.”[15]