How Christians View Each Other

I saw this over at Parchment and Pen--thought it was humorous (and a little too true!) 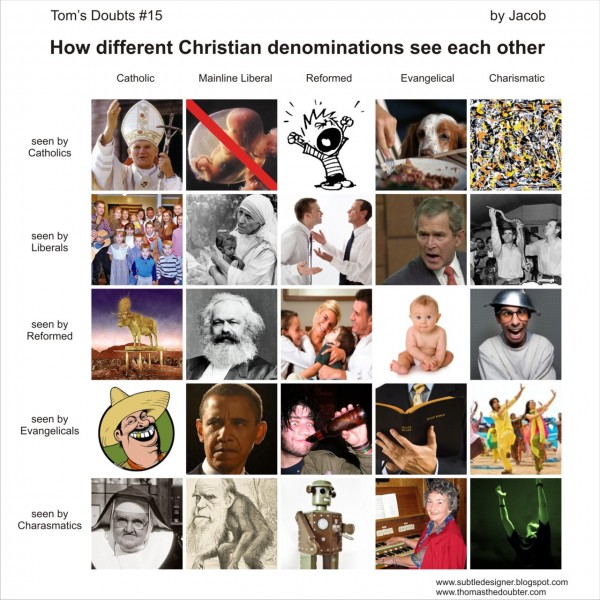 Posted by Richard Klaus at 3:06 PM

Email ThisBlogThis!Share to TwitterShare to FacebookShare to Pinterest
Labels: Humor

I came across this today.  It was powerful and moving.  A boy with cancer, alone in the hospital is brought into a Christian family by adoption.  He comes to Jesus and fights the rest of his short life with faith and joy.  The second video is Pastor John Piper's sermon about young Victor's life and faith. (If you watch the first video be sure to have some tissue nearby.)

Pastor Piper wrote this about Victor:


It was one of the great privileges of my life to speak the word of God at the memorial service for 14-year-old Victor Manuel Watters on September 11, 2011. Sober, painful, and joyful — that’s how I would describe this unexpected way to mark 9/11.

Victor died of cancer — Ewing’s Sarcoma. At the age of nine he was in the hospital alone. His birth family was unable to care for him. Mike and Deb Watters were often on the same unit because of a similar cancer in their daughter. To make a spectacular story of grace short, they adopted Victor, cared for him, led him to Jesus, and surrounded him with overflowing love as he died on September 7, 2011.

There is a post from back in July over at Live Action in which Jewels Green describes her moment of clarity which moved her from pro-choice to pro-life.  The post is well worth reading.  Toward the end of her piece she writes the following:


All of this played out against the backdrop of a very different public view of the pro-life movement. Gone were the days of outright intimidation and harassment; replaced by a peaceful, prayerful presence outside the clinic doors peopled by compassionate souls ready and willing to assist pregnant mothers in practical, useful, and lasting ways. Only by continuing to offer truth, solace, hope, help, and love to the troubled and misguided can we ever hope to end abortion. Only by continuing to speak the truth about the horror and brutality of abortion can we hope to change minds. One heart, one soul, one mother, one child at a time.


Frustation had grown as eight years of the Reagan administration had not led to Roe v. Wade's reversal or reduced the annual toll in dead children.  With legislative and judicial approaches bogged down, some pro-lifers blocked entrances to abortion businesses as part of Operation Rescue.  Others thrust bloody photos of dead unborn babies in front of passerby. (p. 47)

Because of this many associated pro-lifers with the shootings of abortionists and "blockades" of abortion businesses.  A Gallup poll during this time showed that Americans were 45 percent more likely to regard pro-lifers as violent than to see pro-abortion people in the same way.  It is helpful to remember that the pro-abortion side was much more aggressive at this time.  Not only was abortion a "right" is was something good; something to be proud of and glory in for those who had the "procedure."  Frank Schaeffer in his book Crazy for God reminds us of what it was like:


Leading up to Roe, abortion had been pitched as a sad but inevitable solution to rare and agonizing dilemmas, like pregnancy resulting from rape and incest.  But in the context of the  post-Roe firestorm, pro-choice people seemed to also be defending abortion not only as a way to end a pregnancy but as an in-your-face triumphant political statement.  They even seemed to be goading anyone who had doubts about Roe v. Wade.  For instance, in the mid-1970's, the Washington DC chapter of the ACLU auctioned off free abortions at a fundraising raffle held at a dance, and they made sure their action was publicized. (p. 292)

Both pro-life and pro-abortion camps were belligerent and their mutual antipathy fed off each other.

But in 1989 a series of meetings were begun by leaders of various pro-life organizations.  They invited in a number of counselors to direct the "messaging" of the pro-life message.  Out of this effort there emerged a new direction.  Olasky writes:


A consensus to "love them both"--troubled moms and at-risk unborns--also emerged.  (Guy) Condon of Americans United for Life played an important role in that movement, arguing in 1991 that "our sloganeering, demeanor and symbols make us appear to be against women, against individual freedom, against the democratic process if it leads to policies that defy traditional religious principles, and even against one another, if the other doesn't hold precisely the same view we do."

This has had tremendous results.  This is a battle for hearts and minds--the soul of America.  Once the attitude seemingly was to get the legislative and judicial victories at the national level.  This could be done but without a corresponding change in the mindset of Americans this would be short-lived.  The focus on tactics of local victories that chip away at the foundations of Roe are working.  More importantly, as the Christian community has chosen to engage in the works of service and prayer the Lord has blessed.  Olasky quotes an article from Time magazine which states that the,


quiet campaign for women's hearts and minds, conducted in thousands of crisis pregnancy centers around the country, on billboards, phone banks and websites, is having an effect. (p. 49)

The numbers for abortion in America are still horrifically high (about 1.2 million every year) but there has been decrease down from a high of 1.6 million two decades ago.  There is still a long way to go but may God in his mercy grant his church to live, love, and pray in such a way that the evil of abortion on demand is done away with for good.
Posted by Richard Klaus at 2:19 PM

Email ThisBlogThis!Share to TwitterShare to FacebookShare to Pinterest
Labels: Pro-life

God's Pursuit of Justice--Through Us!

Gary A. Haugen has written a book that is a combination of theological insight, moving stories, and creative solutions regarding the issue of injustice in the world.  Good News About Injustice: A Witness of Courage in a Hurting World (IVP, 1999) is well worth reading on this issue.  One poignant section deals with how God brings justice to those who need it.

"A fair question.  Do we have an answer?  I think we do, and it has everything to do with you and me.

"Unless the work of seeking justice is a category of endeavor that is completely different from every other activity on earth that is important to God, the answer to the how question has something to do with what God's people do or don't do.  If you think about it, two truths apply to everything that God wants accomplished on earth: (1) he could accomplish it on his own through supernatural power; but instead, (2) he chooses for the most part to limit himself to accomplishing that which he can achieve through the obedience of his people."  (pp. 96-97)

So even as we cry out for justice we should also be praying and searching to see in what manner we might be the answer to that cry for justice.

I was looking up some information about the book of Daniel today in An Introduction to the Old Testament by Raymond B. Dillard and Tremper Longman III (Zondervan, 1994).  The book of Daniel has a number of controversies that swirl around it.  Some of these are due to the presuppositions brought to the text.  Those with a naturalistic world view simply cannot countenance any notion of predictive prophecy.  This comes out very clearly in the quotation that Dillard and Longman provide regarding Daniel chapter 8 from commentator W. S. Towner who did the commentary on Daniel for the Interpretation series.  Towner writes:


We need to assume that the vision as a whole is a prophecy after the fact.  Why?  Because human beings are unable accurately to predict future events centuries in advance and to say that Daniel could do so, even on the basis of a symbolic revelation vouchsafed to him by God and interpreted by an angel, is to fly in the face of the certainties of human nature.  So what we have here is in fact not a road map of the future laid down in the sixth century B.C. but an interpretation of the events of the author's own time, 167-164 B.C. ...

So called "human certainties" trump a basis of divine intervention.  But this is only true if the absence of God is a "human certainty."  This is not argued for but merely asserted without the slightest regard for proving that point.  I have no doubt Towner is competent in Hebrew and linguistic analysis but philosophically he is wildly off-mark in his question-begging assertions.  What often happens in the disciplines of Old and New Testament studies is that such philosophical nonsense is assumed (and sometimes spouted!) and this is to be merely accepted as "scholarship."  Rarely is there even any attempted justification for the world view that undergirds such positions.
Posted by Richard Klaus at 7:00 PM

Acts 10 and the Objective and Subjective Elements

I've been following the on-going discussion over at Parchment and Pen regarding "Why I Am/Not Charismatic."  In the process I've been posting a few comments on the various threads.  One of the threads concerned the issue of subjectivity in receiving contemporary revelations.  I posted the following in regards to Acts 10:


Regarding dreams and subjectivity…I’ve been impressed by looking at Acts 10 and seeing the interplay between revelatory moments, rational thought, and providential events. Peter is engaged in set prayers (v 9) and falls “into a trance” (v 10). He has a revelatory experience of the sheet coming down with unclean animals. This revelatory event does not bring with it an inherent sense of clarity because “Peter was greatly perplexed in mind as to what the vision which he had seen might be” (v 17). This perplexity causes Peter to “reflect on the vision” (v 19) obviously engaging rational powers. In the midst of this reflection the Holy Spirit “speaks” to Peter about three men looking for him (v 19-20). Simultaneous with this the three men from Cornelius are at the front gate. This is the providential element and it is memorable to Peter because when he recounts the story in Acts 11 he mentions that it was “at that moment three men appeared” (Acts 11.11). When Peter finally comes to Cornelius’ house he says the following: “God has shown me that I should not call any man unholy or unclean” (v 28). This conclusion is a result of a complex of factors including a revelatory vision, the direct speech of the Holy Spirit, rational thought processes and providential events. Putting these all together Peter comes to his conclusion. The vision by itself did not yield this clarity. It was one factor. I see no reason why it might not be the same today. So even if one wants to say that a vision or dream is not clear or that it is open to subjectivity this is no different than the NT times. We look to all the potential factors to draw conclusions.

I would like to develop these thoughts in the future and speak to some of the potential applications for today but for now I figured I would just post these "seed thoughts."
Posted by Richard Klaus at 8:32 PM