Ethical Relativism: An Outline and Critique

* My lecture notes for my class on Ethics and Moral Reasoning when we discussed ethical relativism.  My discussion relied heavily on Francis Beckwith and Gregory Koukl's Relativism: Feet Firmly Planted in Mid-Air. 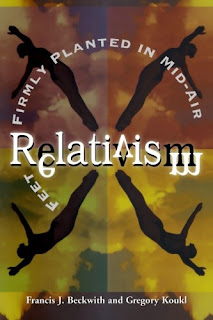 a.     “Society Does Relativism”—this is a descriptive claim

b.     Different cultures seem to have differing moral values.

i.     Based off the work of anthropologists

c.      “Proponents of Society Does Relativism take the differences in moral opinions between cultures as an argument for relativism over moral objectivism.  Since each culture has a different morality, none is justified in claiming that its own brand of morality is correct.  Therefore, there is no objective morality nor any moral absolutes.  Morality is relative.”[1]

i.     “Sumner makes three observations to support his view.  First, he observes that each culture has a unique set of moral values.

ii.     “Second, he claims these moral values are generated by the natural influence of pain and pleasure as people seek to satisfy their base wants and desires.  The values create a complex system of customs that reflect notions of decency, duty, propriety, rights, respect, reverence, and so on, and regulate culture for the general welfare.  Laws are enacted as mechanical, utilitarian devices to enforce the most vital mores.

iii.     “Third, Sumner argues that each group thinks its moral values are right and the others are wrong.”[2]

i.     Hudson Bay tribes: children strangled their own parents as an act of kindness instead of letting them live to what they saw was an unproductive old age

ii.     Underlying value: it is noble to die for the welfare for the many

b.     Hindu women express the universal value of chastity and purity through self-immolation (suttee).

c.      Contemporary abortion debate: often turns on a conflict of facts; not values.

d.     “In India, cows roam free because Hindus consider them sacred.  In America we eat beef.  At first glance it would seem we have conflicting values, but both of our cultures hold that it is wrong to eat other human beings.  In America when Grandma dies, we don’t eat her, we bury her.  In India, Hindus don’t eat cattle because they believe the cow may be grandma reincarnated in another form.”[3]

e.     “Genuine areas of value dispute are rare.  To test for value differences, cite the foundational moral rule one culture affirms and the other denies.  True moral conflicts are those that remain when all factual differences are eliminated.”[4]

ii.     Not a moral thesis at all but merely a descriptive analysis

1.     If even descriptive cultural relativism is a fact this does not mean that there is no objective moral framework.

a.     “Society Says Relativism”—this is a prescriptive or normative claim

i.     Goes beyond anthropology and cultural observation

ii.     Prescribes how one should act

b.     “[T]eaches that all people ought to act in keeping with their own society’s code.  What is right for one society isn’t necessarily right for another.  People ought to do whatever their ‘society says’ to do.”[6]

c.      Culture is both the genesis and justification for morality

i.     No culture = no morality (example: 2 people on island with no culture between them; okay to kill the other)

ii.     This view makes it impossible to criticize another society’s practices no matter how bizarre or morally repugnant

1.     “If conventionalism is an accurate take on morality, then governmentally sponsored genocide can only be quietly observed, not judged.  It cannot even be opposed, because this view requires not only that outsiders remain morally mute in the face of the Holocaust but also that Germans would have been wrong for resisting.  Instead they would have had a moral obligation to participate in the murder of innocent people.”[7]

iii.     There are no immoral laws as long as the law is generated by the culture

1.     The prophet Habakkuk speaks of the Chaldeans this way: “Their justice and authority originate with themselves” and “they whose strength is their god.”  Habakkuk 1.7, 11

v.     Reformer’s dilemma: wrong for people to attempt to subvert or overturn the cultures’ values to become more moral

2.     “Moral reformers typically judge society from the inside.  They challenge their culture’s standard of behavior and then campaign for change.  But when morality is defined by the present society’s standard, then challenging the standard would be an act of immorality.  Social reformers would be made moral outcasts precisely because hey oppose the status quo.”[8]

vi.     Is normative relativism an absolute standard?  If so, then a contradiction!  As J. P Moreland argues:

a.     “I Say Relativism”—morality is determined by the individual’s own tastes and preferences

iii.     Slogan: “Can’t we agree to disagree?”  Subtle implication: both our views are true from our different perspectives.

* My response: “I agree that we disagree.”

b.     “In ethical subjectivism, everything is a private judgment call.  All morality is personal; none is public.  Every moral evaluation is a mere opinion, a personal preference.”[10]

i.     Relativists can’t accuse others of wrongdoing.

ii.     Relativists can’t complain about the problem of evil.