Is the Qur'an Sufficient? 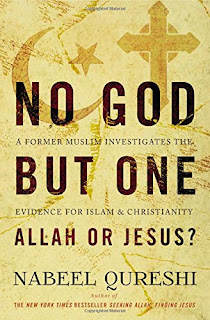 I’ve been reading Nabeel Qureshi’s book No God But One: A Former Muslim Investigates the Evidence for Islam and Christianity (Zondervan, 2016).  The book is very good on a number of topics.  Scattered throughout the work are comments on how Muslims approach the Qur’an.  This is instructive since it is easy to fall prey to the idea that since Muslim’s have a holy book therefore they treat it the same as Christians do their holy Scriptures.  Evangelical Christians have spoken of various attributes of the Bible as Scripture.  For example, Wayne Grudem in his Systematic Theology (Zondervan, 1994) speaks of four characteristics of Scripture:

4.     Perspicuity/Clarity: The clarity of Scripture means that the Bible is written in such a way that its teachings are able to be understood by all who will read it seeking God’s help and being willing to follow it. (p. 108)[1]

In contradistinction to these concepts within evangelical Christianity, Quereshi brings out the difference within Islam.  Within Islamic teaching regarding the Qur’an there is the doctrine of abrogation.  Qureshi writes:

“Grasping the orality of the Quran helps with understanding the controversial phenomenon of abrogation.  While Muhammad was still alive, he would give recitations that cancelled previous ones.  In other words, he would tell his followers that certain portions of the Quran he had relayed before were no longer to be recited as part of the Quran.  This was met with resistance, as people asked him how the Word of God could be cancelled.  The response is recorded in 2.106 of the Quran, which asserts that Allah can substitute verses in his divine scripture because ‘he has power over all things.’

Qureshi goes on to note how this doctrine of abrogation comes to negate the sufficiency of the Quran:

“Not all abrogated verses were left out of the text of the Quran, though Muslim scholars have classically taught that there are multiple types of abrogation, including abrogation of text-not-law and abrogation of law-not-text.  In other words, they teach that Allah intended certain verses to be recited but not practiced, and other verses to be practiced but not recited.  For these reasons, Muslim scholars turn to the records of Muhammad’s life, the hadith, for clarification.  In addition, as we have already seen, more Islamic practices actually come from hadith and not from the Quran.

“This is why Muslims do not believe the Quran is sufficient for Islamic practice, but it requires authoritative hadith.  Very few Muslims believe in the sufficiency of the Quran, and these ‘Quran only’ Muslims are often deemed heretical by mainstream Muslims.” (pp. 109-110—bold-face added)

In a later discussion of the issue of putting apostates to death Qureshi returns to these concepts:

“Some Muslims point out that the Quran does not command the killing of the apostates, and arguably they are correct.  But Islam is not a sola scriptura faith; it has always used hadith to supplement the Quran.  Anyone who prays the five daily prayers would have to admit this, because not only are the words for the prayers not given in the Quran, even the number of daily prayers is not mentioned.  The Quran mentions only three daily prayers, and it does not delineate the words or postures for any of them.  Although there are legitimate ‘Quran-only’ Muslims, they have always been an extreme minority in Islam.  Most Muslims who argue against the law of apostasy using a Quran-only approach are using reasoning that would radically alter their Islamic practice if applied consistently.

“Alone similar lines, some peaceful Muslims argue against the law of apostasy based on Quranic verses such as 2.256, which says, ‘There is no compulsion in religion.’  In order to say this, though, they are also disavowing Muhammad’s example.  Muhammad did not interpret that verse in that manner, as his actions in hadith repeatedly show.  That is why, classically, Muslim theologians have listed 2.256 among the abrogated verses we discussed in the previous chapter.  Ibn Kathir, for example, says 2.256 was abrogated by 9.29, which tells Muslims to fight Jews and Christians.  Popular Muslim scholars have vociferously defended these traditional interpretations throughout the twentieth century.” (p. 136—bold-face added)

In light of Qureshi’s discussion it does appear that the traditional Islamic view of the Quran does not include a notion of sufficiency.  Morevover, the vast amount of material from hadith literature that needs to be considered for a right interpretation of the Quran it appears that the concept of perspicuity is also severely compromised.[2]

[1] Grudem uses the language of “clarity” in his Systematic Theology but I like the older term “perspicuity.”  Grudem himself uses the older term in a 2009 presentation “The Perspicuity of Scripture.”  Available online: http://www.waynegrudem.com/wp-content/uploads/2012/04/Perspicuity-of-Scripture-for-Themelios-Word-97-3.pdf.
[2] The words of James White are appropriate as well: “A careful and fair comparison of the literature of biblical exegesis produced by believing Christian scholarship with that of believing Islamic scholarship is striking.  The intricate, complex studies found among Muslims in the hadith sciences is the closest parallel to the in-depth, original-language-based exegesis of the New Testament among Christians.  The Muslim battleground of debate on these issues is focused upon Islamic tradition, while for believing Christians it is focused upon the text of Scripture itself.”  What Every Christian Needs to Know About the Qur’an (Bethany House, 2013), 163.
Posted by Richard Klaus at 2:31 PM