Elders in the Church: Who They Are and What They Do

* Notes from a Bible study on elders in the church.

The Church: Elders—Who They Are and What They Do

“This is a significant statement because the epistle of James is a general letter written to many churches, all the believers scattered abroad, whom James characterizes as ‘the twelve tribes in the Dispersion’ (James 1:1).  It indicates that James expected that there would be elders in every New Testament church to which his general epistle went—that is, in all the churches in existence at that time.”[1]

2.     Names and titles in the New Testament

“’Pastor’ is coupled with ‘teacher’ here, and together they denote one order of ministry.  In other words, the Greek construction favors interpreting this phrase as one office: the pastor/teacher.  There is not one office of pastor and a separate office of teacher.”[3]

3.     Two group view—both words are connected; there is some relationship between the two groups since both are joined by the one article.

a.     Pastors are a subset of teachers

“This text seems to affirm, both grammatically and exegetically, that all pastors were to be teachers, though not all teachers were to be pastors.”[4] 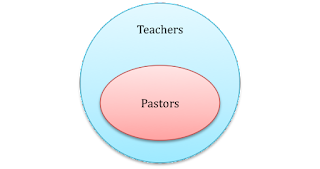 b.     Teachers are a subset of pastors

“If ‘teachers’ are a separate group, they can be understood as a special branch of shepherds (overseers, elders) responsible for instruction in God’s Word (cf. 1 Tim. 5:17).”[5] 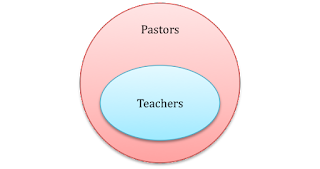 iii.     “Although this term is commonly used in our modern church context, the noun ‘pastor’ (or ‘shepherd’) is used only one time in the New Testament in reference to a church leader (although the verb ‘to shepherd’ and the noun ‘flock’ are occasionally found.”[6]

b.     Elders and Overseers—arguments that these terms refer to the same group

“We must remember that Paul is writing to Timothy when Timothy is at Ephesus (see 1 Tim. 1:3, ‘remain at Ephesus’) and we already know from Acts 20 that there are elders at Ephesus (Acts 20:17-38).  Furthermore, in 1 Timothy 5:17, we see that the elders were ruling the church at Ephesus when Timothy was there, because it says, ‘Let the elders who rule well be considered worthy of double honor.’  Now the ‘bishops’ in 1 Timothy 3:1-2 also are to rule over the church at Ephesus because one qualification is that ‘He must manage his own household well… for if a man does not know how to manage his own household, how can he care for God’s church?’ (1 Tim. 3:4-5).  So here it also seems that ‘bishop’ or ‘overseer’ is simply another term for ‘elder,’ since these ‘bishops’ fulfill the same function as elders quite clearly do elsewhere in this epistle and in Acts 20.”[7]

“Here it also seems appropriate to think that ‘bishops’ is another name for ‘elders,’ because there certainly were elders at Philippi, since it was Paul’s practice to establish elders in every church (see Acts 14:23).  And if there were elders ruling at Philippi, it is unthinkable that Paul would write to the church and single out bishops and deacons—but not elders—if their offices were both different from that of elders.  Therefore, by ‘bishops and deacons’ Paul must have meant the same thing as ‘elders and deacons.’  Although in some parts of the church from the second century A.D. onward, the word bishop has been used to refer to a single individual with authority over several churches, this was a later development of the term and is not found in the New Testament itself.”[8]

v.     Elders and overseers are never listed as separate offices

“If the two terms represent the same office, then why was it necessary to employ both terms?  The reason could be explained by the general use of the terms: elder is more a description of character, whereas overseer is more a description of function.  It appears that originally various congregations preferred one term over the other. The Jewish congregations apparently favored the term presbuteros, while the Gentile congregations favored the term episkopos.  Over time, however, these two terms came to be used in the same congregations and could be used interchangeably since they referred to the leaders in the congregation.  It is likely that both terms remained due to the important connotations each term carried.  The term presbuteros conveyed the idea of a wise, mature leader who was honored and respected by those of the community.  The term episkopos spoke more to the work of the individual whose duty it was to ‘oversee’ and protect those under his care.”[9]

a.     They govern and rule in the church

4.     Installation and Ordination of Elders

i.     Other mentions of this action of laying on of hands:

a.     There should be a plurality of elders

b.     All elders shepherd the flock of God

c.      Elders govern/rule and teach in the church

The Canon of Scripture: A Brief Introduction

* The notes I used for a brief lesson on the canon of Scripture.

The Canon of Scripture 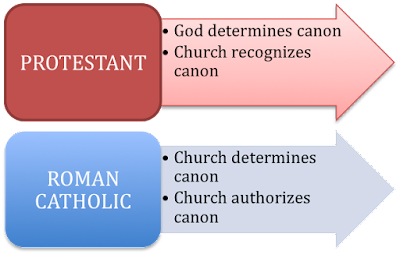 b.     “Fundamentally, the Roman Catholic approach ends up confusing the instrument God uses to produce the Bible (human beings who are part of the community of faith) with the ultimate cause of the Bible (namely God himself).  Thus, it is misleading to say that the church ‘caused’ the Bible.  Sure, they were the means God used, but it is ultimately God who is producing the Bible through human authors.”[4]

b.     “This three-fold division of the Old Testament can be traced as far back as the Prologue to Ecclesiasticus dated to about 132 B.C.  When addressing his disciples, Jesus used similar terminology for the Old Testament: ‘Everything must be fulfilled that is written about me in the Law of Moses, the Prophets, and the Psalms’ (Luke 24:44).  The designation ‘Psalms’ here most likely refers to the entire third section of the Old Testament since it is the first and largest book of that part.”[6]

c.      Canon of the Roman Catholic Church includes the 39 Old Testament books as well as the following additions known as the Apocrypha

d.     Roman Catholic: Council of Trent in 1546 officially declared the Apocrypha to be part of canon of Scripture

i.     “It is significant that the Council of Trent was the response of the Roman Catholic Church to the teachings of Martin Luther and the rapidly spreading Protestant Reformation, and the books of the Apocrypha contain support for the Catholic teaching of prayers for the dead and justification by faith plus works, not by faith alone.”[7]

e.     Why do Protestants reject the Apocrypha?  Wayne Grudem summarizes the case:

“Thus the writings of the Apocrypha should not be regarded as part of Scripture: (1) they do not claim for themselves the same kind of authority as the Old Testament writings; (2) they were not regarded as God’s words by the Jewish people from whom they originated; (3) they were not considered to be Scripture by Jesus or the New Testament authors; and (4) they contain teachings inconsistent with the rest of the Bible.”[8]

a.     “The development of the New Testament canon begins with the writings of the apostles.  It should be remembered that the writing of Scripture primarily occurs in connection with God’s great acts in redemptive history.”[9]

c.      In the New Testament some of the writings are already being recognized and placed on the same level as the Old Testament Scriptures

a.     Early church did not have a New Testament canon

i.     Gospel message was preached verbally

iii.     Difficult to make into a book form.  The Codex (earliest book-like technology) comes into bloom in 2nd century

i.     Denied Old Testament Scripture and was anti-Semitic

ii.     Docetist—Jesus only appeared to be human

ii.     Author of Muratorian Canon also mentions the categories: disputed books, edifying but not authoritative books, and books to be rejected as heretical

iii.     “What is really remarkable … is that, though the fringes of the New Testament canon remained unsettled for centuries, a high degree of unanimity concerning the greater part of the New Testament was attained within the first two centuries among the very diverse and scattered congregations not only throughout the Mediterranean world but also over an area extending from Britain to Mesopotamia.”[10]

i.     “At this point it seems reasonable to summarize the writings of the New Testament which have been quoted.  In the first place should be put the holy tetrad of the Gospels.  To them follows the writing of the Acts of the Apostles.  After this should be reckoned the Epistles of Paul.  Following them the Epistle of John called the first, and in the same way should be recognized the Epistle of Peter.  In addition to these should be put, if it seems desirable, the Revelation of John, the arguments concerning which we will expound at the proper time.  These belong to the Recognized Books .  Of the Disputed Books which area nevertheless known to most are the Epistle called of James, that of Jude, the second Epistle of Peter, and the so-called second and third Epistles of John which may be the work of the evangelist or of some other with the same name.”[11]

ii.     “By the early fourth century, then, all twenty-seven books of the New Testament were tentatively considered canonical, with twenty-two of them definitely so.”[12]

a.     Apostolicity: Was a book written by an apostle or an associate of an apostle?

b.     Orthodoxy: Did it conform to the teachings of other books known to be by apostles?

c.      Catholicity: Was it accepted early and by a majority of churches?

a.     Their dates are too late to be considered as coming from an apostle

“It is also noteworthy that not a single document written after about A.D. 120 was considered for inclusion, not least because such documents couldn’t claim to be in direct contact with the apostolic tradition.  This may explain in part why none of the Gnostic documents came up for debate.  In all likelihood they are from a later date (the possible exception is the Gospel of Thomas).

“The Gnostic documents weren’t deleted from the canon, rather they were never serious contenders for inclusion in it.”[13]

b.     They portray a faulty theology of Christ à docetistic or Gnostic

a.     The Protestant view of the canon is that it is discovered not determined by the church.

c.      There are historical and theological reasons to reject the Roman Catholic claims for the inclusion of the Apocrypha.

d.     The New Testament demonstrates a continuing of written Scripture by the apostles and those associated with them.

e.     The full recognition of the New Testament canon took time but very early the vast majority of the books were recognized as Scripture.

f.      Other “Gospels” fail to fulfill the basic tests of apostolicity, orthodoxy, and catholicity.

i.     “Ten Basic Facts About the NT Canon That Every Christian Should Memorize”  http://michaeljkruger.com/the-complete-series-ten-basic-facts-about-the-nt-canon-that-every-christian-should-memorize/