The Genre of Horror

My wife was teaching a literature class and she was discussing Poe's work as an early example of horror.  Some of the students wondered why they needed to read this genre.  She asked me to speak for a few minutes on why we need this type of literature.  I read some in the work of Brian Godawa.  His essay "A Theology of Horror Movies" was originally published in Chalcedon Journal (May and June, 2002) and can be found online.  I also came across his piece An Apologetic of Horror after I shared with the students.

Here a few quotations from Godawa's An Apologetic of Horror:

The prophet Daniel wrote horror literature, based on images and drama pitched by God to him in Babylon. Not only did God turn the blaspheming king Nebuchadnezzar into an insane wolfman to humble his idolatrous pride (Dan. 4), but He storyboarded horror epics for kings Belshazzar and Darius as allegories of the historical battle between good and evil to come. Huge hybrid carnivorous monsters come out of the sea like Godzilla, one of them with large fangs and ravishing claws to devour, crush, and trample over the earth (7:1–8) until it is slain and its flesh roasted in fire (7:11); there are blasphemous sacrileges causing horror (8:13), including an abomination of desolation (9:26–27); angels and demons engaging in spiritual warfare (10:13); rivers of fire (7:10); deep impact comets and meteors colliding with the earth, Armageddon style (8:10); wars, desolation, and complete destruction (9:26-27). The book of Daniel reads like God’s own horror film festival.

The book of Revelation is an epic horror fantasy sequel to Daniel, complete with science fiction special effects, and spectacles of horror darker than anything in a David Cronenberg Grand Guignol theater of blood. In this apocalyptic prophecy we read of a huge demonic spectacle of genetically mutated monsters chasing and tormenting scream ing people (9:1–11); armies of bizarre beasts wreaking death and destruction on the masses (9:13–18); a demonic dragon chasing a woman with the intent to eat her child (12:3–4); a seven-headed amphibious Hydra with horns that blasphemes God and draws pagan idol worship from everyone on earth (13:1–10); massive famines (6:8); gross outbreaks of rotting sores covering people’s bodies (16:2); plagues of demonic insects torturing populations (9:1–11); fire-breathing Griffon-like creatures (9:17); supernatural warfare of angels and demons (12:7); the dragging of rotting corpses through the streets while people party over them (11:7–13); rivers and seas of blood (14:20; 16:3); a blaspheming harlot doing the deed with kings and merchants (17:1-5) who then turn on her, strip her naked, burn her with fire, and cannibalize her (17:16); more famines, pestilence, and plagues (18:8); and when the good guys win, there is a mighty feast of vultures scavenging the flesh of kings and commanders in victory (19:17–18). And I might add, this all gives glory to God in the highest.

I wrote the following for my high school systematic theology class when discussing the topic of inerrancy.  The whole discussion is pulled from Vern Poythress' book Inerrancy and the Gospels: A God-Centered Approach to the Challenges of Harmonization (Westchester: Crossway, 2012), 17-24. 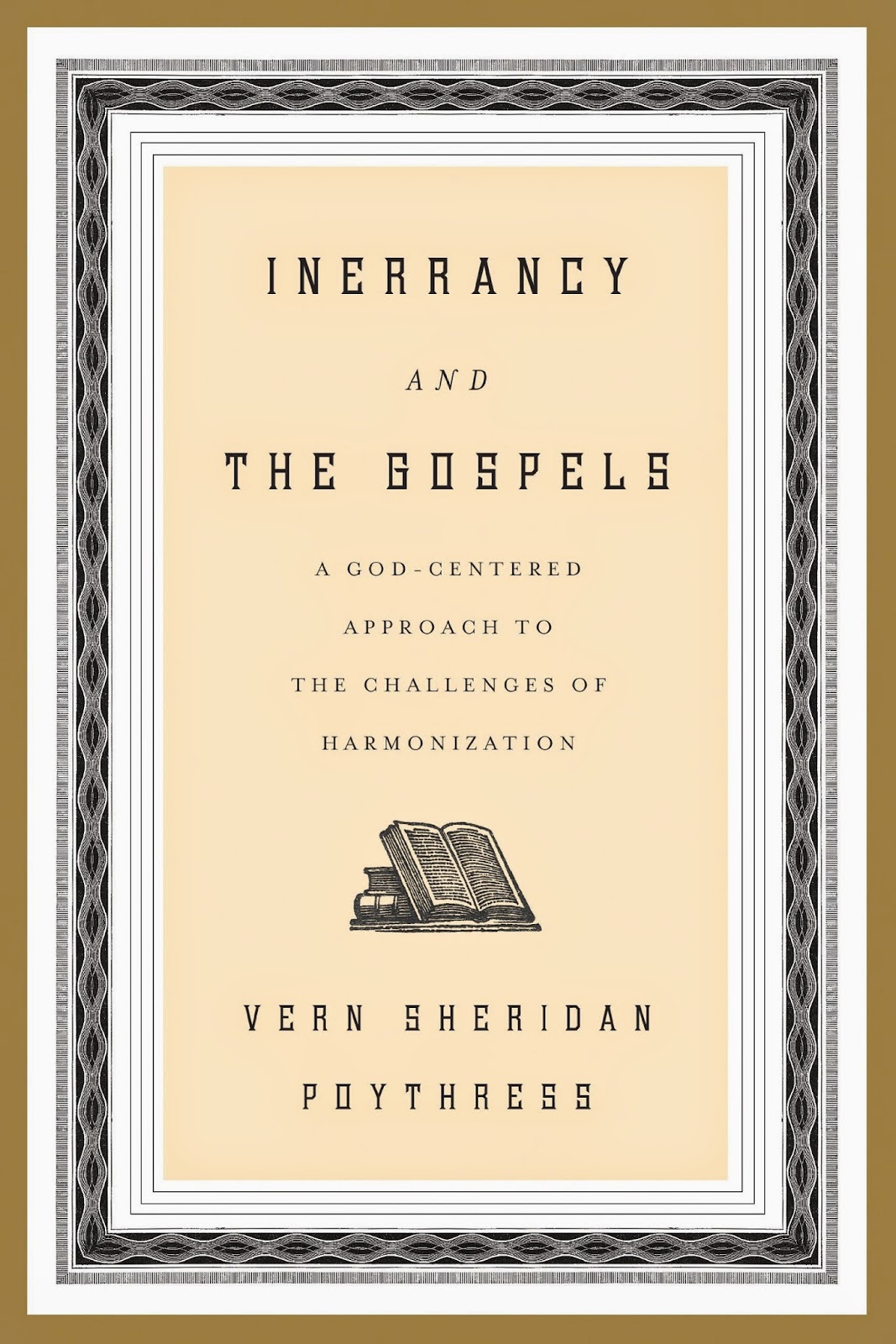 1.     Possibility of multiple events: are these two different events being narrated?

In any case that deals with parallel passages we have to ask whether they recount the same incident or two different incidents. In this case there are many similarities between the two accounts. The centurion’s speech given in Matthew 8:9 is almost identical to Luke 7:8. We can safely conclude that we are dealing with two accounts of one event. So there is a genuine difficulty.[2]

a.     Postulate stages in the encounter between Jesus and the centurion

iii.     Then centurion came in person and repeated some of what had been said earlier (Matthew 8.5-9)

When we bear in mind the parallel account in Matthew viii. 5–13, we must picture to ourselves that after the centurion had sent his friends to Jesus he also went to Him himself. Owing to the seriousness of the circumstances and his inner urge to go to Jesus himself, notwithstanding his feeling of unwor- thiness, he overcame his initial hesitation. Luke emphasises the fact that the centurion sent friends, while Matthew only states that the centurion went to Jesus. And so the two Gospels supplement each other.[3]

i.     Centurion states explicitly that he is unworthy (Luke 7.6) and that is why he has sent others (Luke 7.7).  Yet, he then changes his mind comes for a face to face to meeting with Jesus.

But Geldenhuys supplies possible motivations by reminding us of the “seriousness of the circumstances,” by postulating an “inner urge” to come to Jesus, and by labeling his original attitude “initial hesitation” rather than a firm resolve not to come because of his unworthiness. Is all this possible? It is. Human motivations and decision making are complex and often include some wavering or change of mind.[4]

ii.     Repetiton: Luke 7.6-8 friends give speech then, according to this theory, centurion says the same thing again (Matthew 8.8-9)

In Geldenhuys’s picture of the event, the centurion repeated in person what he had said to his friends earlier. We may ask why the centurion thought he had to repeat his speech, since his friends had already delivered it. But human motivations are complex. Particularly in a situation of distress, such as the emotional turmoil the centurion experienced, he might in spite of himself repeat what he knew had already been said.[5]

3.     Representatives acting on behalf of the centurion

His [Matthew’s] omission of the means of the centurion’s approach to Jesus is a valid literary device to highlight the message of the incident as he sees it (on the principle, common in biblical and contemporary literature, that a messenger or servant represents the one who sent him to the point of virtual identity).  R. T. France[6]

b.     Craig Blomberg points out that Matthew 27.26 and Mark 15.15 also illustrate this principle.  “Both verses report that Pilate scourged Jesus; but given the social and military protocol of the Roman world, Pilate would not have taken up the scourge in his own hands.  The verses mean that Roman soldiers would have physically handled the scourge, acting on Pilate’s orders.”[7]

What We Learn from the Differences in the Narratives

1.     Plausible harmonizations are not inspired; the texts with the differences are inspired!

a.     The differences of nuance and detail have something to teach us

b.     Beware of “flattening out” the text into a harmony

Matthew shows repeated concern for the unique role of the Jews and the issue of Jewish rejection of Jesus. Matthew alone has the expression “sons of the kingdom”: “the sons of the kingdom will be thrown into the outer dark ness” (Matt. 8:12). These “sons of the kingdom” are Jews who are resisting his ministry. They have the privilege of having a certain nearness to “the kingdom,” that is the kingdom of God, and yet, tragically, they “will be thrown into the outer darkness.”Matthew alone includes the pointed threat, “Therefore I tell you, the kingdom of God will be taken away from you and given to a people producing its fruits” (Matt. 21:43). Matthew, more than the other Gospels, emphasizes the Jewishness of Jesus (Matt. 1:1–17). Twice Jesus emphasizes his ministry “to the lost sheep of the house of Israel” (Matt. 10:6; 15:24). But Jews who presume on their heritage are in danger of being left out.

This theme is important to Matthew. It comes out pointedly in our first pas- sage, Matthew 8:5–13, because Jesus commends the centurion for his faith and contrasts this commendation with the failure in Israel: “Truly, I tell you, with no one in Israel have I found such faith” (Matt. 8:10). The centurion was a Roman soldier, not a Jew. His Gentile character comes more starkly to the foreground in that Matthew does not mention “elders of the Jews” as intermediaries.[8]

3.     Luke stresses the humility of centurion

The Gospel of Luke has humility as a theme. “He [the Lord] has brought down the mighty from their thrones and exalted those of humble estate” (Luke 1:52). “For everyone who exalts himself will be humbled, but the one who humbles himself will be exalted” (Luke 18:14; see 14:11). Luke devotes attention to social outcasts and marginalized people: women, the poor, the sick, tax collectors, Gentiles (Luke 4:18; 7:21–23). Luke 7:1–10, by explicitly including the role of the intermediaries and by including the contrast between “worthy” (7:4) and “not worthy” (7:6), has highlighted the theme of humility and of Jesus’s mercy to the “unworthy.”[9]

"Was Nero the Antichrist?"


1.     The need to define terms correctly!  What have you heard about "the Antichrist?"

*Note: None of the references to "antichrist" are in the book of Revelation even though the apostle John wrote both the Epistles of John and Revelation.

* you "heard" that antichrist is coming; (not necessarily true)

* they (the antichrists) went out from the church

* liar = one who denies that Jesus is the Christ

* antichrist = one who denies the Father and the Son

* antichrist identified with a "spirit"

* this "spirit" does not confess Jesus

* according to John antichrist is now already in the world

* antichrists have gone out into the world (from the church)

4.     Attributes of antichrists according to John

John clearly applies the conception of the one antichrist (ho antichristos)
to the generic tendency to promote lies about the identity of Christ.
Kenneth Gentry He Shall Have Dominion, p. 373

*Question: Does Nero fit these attributes?  No.

5.     Gary DeMar points to a two-fold problem with identifying "antichrist":

*The point here: Antichrist is wrongly equated with the Beast of Revelation
(See The Truth About Antichrist and His Kingdom by Thomas Ice and Timothy
Demy, pp. 8,9, and 21 for an example of this fallacy.)

*Question: What about the language "every tribe and people and tongue and nation
was given to him" (v. 7)?

Answer:  This phrase echoes Daniel 5:19, in which we are told that "all the peoples,
nations, and men of every language feared king Nebuchandnezzar."  Yet
Nebuchandnezzar's empire did not extend far beyond the Fertile Crescent,
an area somewhat smaller than the Greek or Roman Empires.  Thus,
although the language used is universal, it can have a limited application
to the  known political world of the writer's time.
James Nance "The Anti-Christ and the Beast" p. 114

7.     Indicators that the Beast was Nero

Suetonius and Plutarch record for us that in the time of Domitian the festival of Septimontium ("the feast of the seven hilled city") was held annually in December to celebrate the seven hills enclosing Rome.  Archaeologists have discovered the Coin (or Medallion) of Vespasian that exhibits a picture of the goddess Roma as a woman seated on seven hills.
Kenneth Gentry Before Jerusalem Fell, p. 149

*This listing of emperors is detailed in the Roman historians Suetonius
(AD 70-160) Lives of the Twelve Caesars and Dio Cassius (AD 150-235)
as well as the Jewish historian Josephus (AD 37-101).

Posted by Richard Klaus at 6:25 PM