Over at Mike Bird's blog Euangelion he has a guest post by Jill Firth-- Book Notice: Soong-Chah Rah on Prophetic Lament. 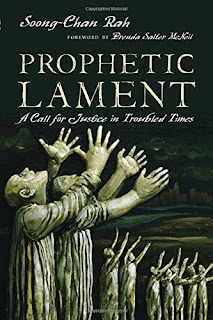 Prophetic Lament is a commentary on the book of Lamentations in the Resonate series that seeks to connect Biblical books with contemporary voices of hope and lament, in a practical, pastoral and culturally conscious ‘un-commentary’. In each chapter, Rah moves between the text of Lamentations and its historical setting in the fall of Jerusalem, and contemporary or historical situations in American life such as the death of Rah’s father, the establishment of the slave trade, the ignoring of women’s voices, and racial violence in America today.

In attempting to link the message of Lamentations to contemporary events, Rah brings up the shooting of Michael Brown in the following manner:


Rah connects the book of Lamentations to responses to the fatal shooting of 18 year old Michael Brown by a white police officer on August 9, 2014 in Ferguson, Missouri. After his death, Michael Brown was left uncovered in the August sun for four hours. Rah comments, ‘Michael Brown was deemed no better than roadkill.’

On the Amazon page for Rah's book one can "look inside" the book and find the following lamentation based on chapter of five of Lamentations:

Remember Lord, what happened to Michael Brown and Eric Garner;

look, and see the disgraceful way they treated their bodies.

Our inheritance of the image of God in every human being has been co-opted and denied by others.


We must scrap for basic human rights; our freedom and our liberty has great price.


Corrupt officers and officials pursue us and are at our heels; we are weary and find no rest.


We submitted to uncaring government agencies and to big business to get enough bread.


Our ancestors sinned the great sin of instituting slavery; they are no more--but we bear their shame.


The system of slavery and institutionalized racism ruled over us, and there is no one free from their hands.


We got our bread at the risk of our lives because of the guns on the streets.


Michael Brown's skin is hot as an oven as his body lay out in the blazing sun.


Women have been violated throughout our nation's history; black women raped by while slave owners on the plantations.


Noble black men have been hung, lynched and gunned down; elders and spokesmen are shown no respect.


Young men can't find work because of unjustly applied laws; boys stagger under the expectation that their lives are destined for jail.


The elder statesman and civil rights leaders are gone from the city gate; young people who speak out in protest through music are silenced.


Trust in our ultimate triumph has diminished; our triumphant dance has turned to a funeral dirge.


Our sense of exceptionalism has been exposed. Woe to us, for we have sinned!


Because of this our hearts are faint, because of these things our eyes grow dim


for our cities lie desolate with predatory lenders and real estate speculators prowling over them.


You, Lord, reign forever; your throne endures from generation to generation.


We do you always forgets us? Why do you forsake us so long?


Restore us to yourself, Lord, that we may return; renew our days as of old


unless you have utterly rejected us and are angry with us beyond measure.

I put in bold-face the two lines which refer to the treatment of Michael Brown's body.  In the epilogue to Rah's book he has the following statements:


The deceased body of Michael Brown was left uncovered out in the heat of an August afternoon for four and a half hours, with friends and family denied access to the body.  Michael Brown was deemed no better than roadkill.


The dead body of Michael Brown was not accorded proper respect.  The literal dead body lying on the streets of a quiet apartment complex in a Midwestern suburban town demanded a proper funeral dirge in the community.

I appreciate Rah's desire to find contemporary significance and application of the prophetic word.  Having recently preached through the prophets of Jonah and Nahum I have been thinking of these issues.  I read Julie Woods' essay The West as Nineveh: How Does Nahum's Message of Judgement Apply to Today? Themelios 31/1 (October 2005), 7-37.  Woods quotes the work of Grant Osborne on how to properly interpret and apply the ancient text.

* Determine the deep structure principle behind the message

* Discover the parallel situation in the modern context

* Decide whether to contextualize at the general or specific level

In order to properly apply the text to the modern context one must accurately understand the contemporary situation.  The problem with Rah's applications of Lamentations to the death of Michael Brown is that he has failed to understand all the available facts regarding Michael Brown.  Rah argues that Brown's body was not accorded a proper respect due to its being left on the hot pavement for four hours.  Rah, however, has left out some crucial facts that provide the context for the treatment of Brown's body.

The Department of Justice Report on Michael Brown's death provides this important information which explains what happened and why:

Wilson shot Brown at about 12:02 p.m. on August 9, 2014. Within minutes, FPD officers responded to the scene, as they were already en route from Wilson’s initial radio call for assistance. Also within minutes, residents began pouring onto the street. At 12:08 p.m., FPD officers requested assistance from nearby SLCPD precincts. By 12:14 p.m., some members of the growing crowd became increasingly hostile in response to chants of “[We] need to kill these motherfuckers,” referring to the police officers on scene. At around the same time, about 12:15 p.m., Witness 147, an FPD sergeant, informed the FPD Chief that there had been a fatal officer- involved shooting. At about 12:23 p.m., after speaking with one of his captains, the FPD Chief contacted the SLCPD Chief and turned over the homicide investigation to the SLCPD. Within twenty minutes of Brown’s death, paramedics covered Brown’s body with several white sheets.

The SLCPD Division of Criminal Investigation, Bureau of Crimes Against Persons (“CAP”) was notified at 12:43 p.m. to report to the crime scene to begin a homicide investigation. When they received notification, SLCPD CAP detectives were investigating an armed, masked hostage situation in the hospice wing at St. Anthony’s Medical Center in the south part of St. Louis County, nearly 37 minutes from Canfield Drive. They arrived at Canfield Drive at approximately 1:30 p.m. During that time frame, between about 12:45 p.m. and 1:17 p.m., SLCPD reported gunfire in the area, putting both civilians and officers in danger. As a result, canine officers and additional patrol officers responded to assist with crowd control. SLCPD expanded the perimeter of the crime scene to move the crowd away from Brown’s body in an effort to preserve the crime scene for processing.

Upon their arrival, SLCPD detectives from the Bureau of Criminal Identification Crime Scene Unit erected orange privacy screens around Brown’s body, and CAP detectives alerted the St. Louis County Medical Examiner (“SCLME”) to respond to the scene. To further protect the integrity of the crime scene, and in accordance with common police practice, SLCPD personnel did not permit family members and concerned neighbors into the crime scene (with one brief exception). Also in accordance with common police practice, crime scene detectives processed the crime scene with Brown’s body present. According to SLCPD CAP detectives, they have one opportunity to thoroughly investigate a crime scene before it is forever changed upon the removal of the decedent’s body. Processing a homicide scene with the decedent’s body present allows detectives, for example, to accurately measure distances, precisely document body position, and note injury and other markings relative to other aspects of the crime scene that photographs may not capture.

In this case, crime scene detectives had to stop processing the scene as a result of two more reports of what sounded like automatic weapons gunfire in the area at 1:55 p.m. and 2:11 p.m., as well as some individuals in the crowd encroaching on the crime scene and chanting, “Kill the Police,” as documented by cell phone video. At each of those times, having exhausted their existing resources, SLCPD personnel called emergency codes for additional patrol officers from throughout St. Louis County in increments of twenty-five. Livery drivers sent to transport Brown’s body upon completion of processing arrived at 2:20 p.m. Their customary practice is to wait on scene until the body is ready for transport. However, an SLCPD sergeant briefly stopped them from getting out of their vehicle until the gunfire abated and it was safe for them to do so. The SLCME medicolegal investigator arrived at 2:30 p.m. and began conducting his investigation when it was reasonably safe to do so. Detectives were at the crime scene for approximately five and a half hours, and throughout that time, SLCPD personnel continued to seek additional assistance, calling in the Highway Safety Unit at 2:38 p.m. and the Tactical Operations Unit at 2:44 p.m. Witnesses and detectives described the scene as volatile, causing concern for both their personal safety and the integrity of the crime scene. Crime scene detectives and the SLCME medicolegal investigator completed the processing of Brown’s body at approximately 4:00 p.m, at which time Brown’s body was transported to the Office of the SLCME. [pp. 8-9]

This listing of the details and the volatile and dangerous situation that was ongoing for hours helps to explain why Michael Brown's body was not moved sooner.  It had nothing to do with failing to honor his body.  Rather, there was a concern to keep the scene free from contamination so an accurate examination could be conducted.  Rah mentions nothing about the gun-fire and the potential violence involved at the scene.

Rah may have some important truths to teach the church from his understanding and applications from Lamentations but his understanding of the Michael Brown incident is woefully inadequate.  Rah has not spoken the truth in this matter.  Yes, lamentation is needed in the contemporary church but let's be sure we are lamenting real crises (there are many!) and not foolish distortions.
Posted by Richard Klaus at 9:38 PM