A Few Notes on Textual Criticism

In my apologetics/worldview class that I am teaching we are using the book Reinventing Jesus: How Contemporary Skeptics Miss the Real Jesus and Mislead Popular Culture by J. Ed Komoszewski, M. James Sawyer, and Daniel B. Wallace. 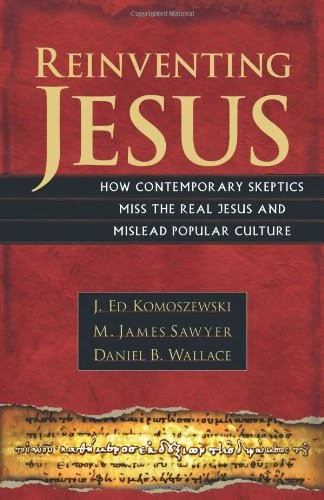 The portion of the book specifically dealing with textual criticism was done by Daniel Wallace.  Using his material and other sources I put together the following handout for the class.

“One lesson we must learn from Misquoting Jesus [by Bart Ehrman] is that those in ministry need to close the gap between the church and the academy.  We have to educate believers.  Instead of trying to isolate laypeople from critical scholarship, we need to insulate them.  They need to be ready for the barrage, because it is coming.  The intentional dumbing down of the church for the sake of filling more pews will ultimately lead to defection from Christ.  Ehrman is to be thanked fro giving us a wake-up call.”[1]

Indeed, so extensive are these citations that if all other sources for our knowledge of the text of the New Testament were destroyed, they would be sufficient alone for the reconstruction of practically the entire New Testament.[4]

2.     Comparisons with Other Ancient Literature[5]

a.     No two copies of the Greek manuscripts agree completely.

i.     Textual variant: Any place in the NT manuscripts where there is not uniformity of wording.

d.     We must weigh the quality of the variants and not merely the quantity!

a.     Spelling differences and nonsense errors

b.     Differences that do not affect translation or that involve synonyms

1.     Greek is an inflected language so word order does not determine meaning like in English (i.e., “Matt hit the ball.”  “The ball hit Matt.”)

1.     Lectionaries: manuscripts that have assigned readings for various days

2.     Sometimes add clarification to the text

b.     Lectionary readings add the name “Jesus” to help guide the daily readings

c.      Meaningful variants that are not viable

This is meaningful, but it is not viable.  There is little chance that one late manuscript could contain the original wording when the textual tradition is uniformly on the other side of the reading.[6]

ii.     Harmonization of parallel passages in Matt., Mark, and Luke

d.     Meaningful and viable variants à variants that change the meaning of the text to some degree

iv.     Only about 1% of variants are “meaningful and viable” and none affect any foundational Christian beliefs!

5.     How to Count Textual Variants: Colossians 2.2 example (from http://bible-translation.net/page/how-to-count-textual-variants)

2that their hearts may be encouraged, being knit together in love, to reach all the riches of full assurance of understanding and the knowledge of God’s mystery, which is Christ [tou theou Christou]. (ESV)

“In the above diagram, there are 26 total "documents" - designated by solid lines.  The red documents contain variants.  In this illustration there would be a total of nine variants in 26 copies.  But, we can see that they are really one variant that has been copied.  This illustrates why the Bible is actually extremely well preserved since we are able reconstruct the document tree and see where variants are introduced and then document them.”[7]

a.      Alexandrian: produced in Egypt, began in 2nd century

b.     Western: produced in Rome and West, began in 2nd century

c.      Byzantine: produced in East, later development based on Western and Alexandrian

d.     Important for the following reasons:

i.     More regions that the reading is in: earlier reading (esp. for first four centuries)

ii.     No one could have gathered all the manuscripts and changed them
[1] Daniel B. Wallace, “The Gospel According to Bart: A Review Article of Misquoting Jesus by Bart Ehrman” JETS 49 (2006), 337. Online: http://www.etsjets.org/files/JETS-PDFs/49/49-2/JETS_49-2_327-349_Wallace.pdf
[2] These figures in this section come from NT scholar and textual critic Dan Wallace in the book Reinventing Jesus by J. Ed Komoszewski, M. James Sawyer, and Daniel B. Wallace (Kregel, 2006), p. 77.
[3] See the online blog post by New Testament textual critic Dirk Jongkind, “What is the Oldest Manuscript of the New Testament?” Evangelical Textual Criticism blog (Tuesday January 13, 2015). Online: http://evangelicaltextualcriticism.blogspot.com/2015/01/what-is-oldest-manuscript-of-new.html
[4] Bruce M. Metzger and Bart D. Ehrman The Text of the New Testament: Its Transmission, Corruption, and Restoration 4th ed. (New York and Oxford: Oxford University Press, 2005), p. 126—quoted in Reinventing Jesus, p. 81.
[5] Information in chart compiled from Norman L. Geisler and William E. Nix A General Introduction to the Bible rev. and expanded (Moody Press, 1986), p. 408; J. P. Moreland Scaling the Secular City: A Defense of Christianity (Baker, 1987), p. 135.
[6] Reinventing Jesus by J. Ed Komoszewski, M. James Sawyer, and Daniel B. Walllace (Kregel, 2006), p. 59.
[7] Online: https://school.carm.org/amember/files/demo2/bible/reliable.htm
Posted by Richard Klaus at 11:43 AM