"The Gospel of Jesus' Wife"--Here We Go Again!

The news will be all abuzz about the unveiling of an ancient papyrus fragment which has Jesus speaking of Mary (presumably Mary Magdalene) as his "wife."  Dr. Karen King of Harvard Divinity School was behind yesterday's announcement of the fragment.  The Smithsonian's coverage can be found HERE and a piece in the Huffington Post can be found HERE. 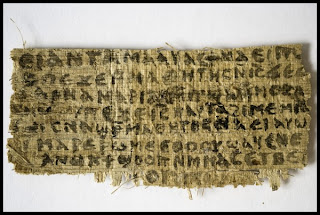 Some facts regarding the fragment:

2.  The language is Coptic and is on both sides of fragment indicating it was part of a codex (book) rather than a scroll.

3.  The fragment is dated to the second half of the fourth century A.D. and its place of origins is probably in Upper Egypt according to AnneMarie Luiendijk (professor at Princeton and an authority on Coptic papyri) and Roger Bagnall (a papyrologist who directs the Institute for the Study of the Ancient World at New York University).

4.  The front side has eight fragmentary lines and the back side has three words that are decipherable ("my mother" and "three").

5.  There is a chemical test scheduled to determine if the ink's chemistry is compatible with inks from antiquity.  These results are, obviously, not available yet.

From these facts there are a number of inferences and interpretations that are being drawn:

1.  Karen King believes this fragment is a translation from an earlier document that was written in Greek in the second century.

2.  King repeatedly refers to this fragment as a "gospel" but the Huffington Post reports that "King also said that a professor who saw her report asked her if the text on the papyrus could have been a homily and not a gospel, and idea she said she had not considered."

3.  The media refers to this as "sure to send shock waves through the Christian world."  The media love to trumpet these discoveries as somehow upending Christianity as we know it and as, potentially, displacing the portrait of Jesus from the canonical gospels.

Be assured that the popular media will suggest that this fragment intimates that Jesus may have been married.  Buried in the news stories you will eventually find that the fragment tells us nothing, repeat,
nothing, about the historical Jesus. The recent Smithsonian article speaks of this clearly:


But Dan Brown fans, be warned: King makes no claim for its usefulness as biography.  The text was probably composed in Greek a century or so after Jesus' crucifixion, then copied into Coptic some two centuries later.  As evidence that the real-life Jesus was married, the fragment is scarcely more dispositive than Brown's controversial 2003 novel, The Da Vinci Code.  (p.2--as printed out)

In the weeks leading up to the mid-September announcement, King worried that people would read the headlines and misconstrue her paper as an argument that the historical Jesus was married.  But the "Gospel of Jesus' Wife" was written too long after Jesus' death to have any value as biography--a point King underscores in her forthcoming article in the Harvard Theological Review.  (p. 8--as printed out).

In point of fact, Dr. King thinks the best historical evidence for Mary not being married to Jesus comes from the New Testament because she is referred to by her hometown, Migdal, rather than by her relationship to Jesus--which she would have been had they been married.

So, this new discovery tells us nothing about Jesus.  What does this fragment indicate?  Here there is controversy as well.  For Dr. King the fragment is fresh evidence of the diversity of voices in early Christianity.  According to King, there were alternate versions of Christianity and over time the forces of "orthodoxy" silenced other versions of Christianity.  This is nothing new for Dr. King.  She has been arguing this thesis for a number of years.  For example, in discussing the Nag Hammadi texts which contain a number of Gnostic "gospels" she has written:


These writings are of inestimable importance in drawing aside the curtain of later perspectives behind which Christian beginnings lie, and the exposing the vitality and diversity of early Christian life and reflection.  They demonstrate that reading the story of Christian origins backward through the lens of canon and creed has given an account of the formation of only one kind of Christianity, and even that only partially.  The fuller picture lets us see more clearly how the later Christianity of the New Testament and the Nicene Creed arose out of many different possibilities through experimentation, compromise, and very often conflict.  From her book The Gospel of Mary Magdala (Polebridge, 2003), p. 157 as quoted in Ben Witherington The Gospel Code (IVP, 2004), p. 118.


Did you catch the sleight of hand in this analysis?  Forget altogether the fourth and fifth century councils and the formation of the creeds.  The essential question is, What were the earliest documents (and what do they say)?  The answer is the New Testament itself.  We have no documents earlier than these, and as any good historian knows, the documents closest to the source of a movement are likely to be most revealing about its origins.

The documents written by eyewitnesses or those in contact with eyewitnesses are our primary sources, and these documents happen to be in the New Testament, plus a few other likely first-century documents, such as the Didache and 1 Clement.  There is no good evidence that Gnosticism was one of the dueling forms of Christianity in the first century A.D.  Thus the degree of diversity that King thinks existed in the earliest churches is not historically demonstrable.  There is no evidence of Gnostics or Marcionites in the first-century church.

In King's view the earliest Christians modeled wide diversity, and we are called to "emulate their struggles to make Christianity in our own day."  So the agenda is laid bare: it's our job not merely to rewrite the history of ancient Christianity but to remake modern Christianity.  This clarion call needs to be seen for what it is.  It's not simply a rejection of the canonizing process and creedal orthodoxy but also of the limits of first-century Christian diversity in favor of a much broader and more pluralistic model.  King calls us to reject our earliest historical sources, the New Testament, as the basis of defining the normative character of the Christian faith.  It plays right into our culture's belief that "the new is true."   Ben Witherington The Gospel Code (IVP, 2004), p. 118-119.

These ancient fragments become, for some scholars and others, vehicles for contemporary agendas.  Again, the Huffington Post reports in regards to Karen King's perspective:


King added that she hopes the discovery will diminish the view outside of academic circles that the debate over marriage and sexuality in the early church is "fixed and over."  In current church debates over issues such as same-sex marriage and marriage among Catholic priests, "having more voices from the early church and a better, more accurate version of early Christianity is more helpful," she said.

So we move from the discovery of a small fragment of a fourth-century Coptic manuscript to engaging the debate over same-sex marriage!  Something more than dispassionate archaeology and historical analysis is going on here.  In the midst of it all, the primary documents giving us the clearest portrait of Jesus and the early church are by-passed in favor of any scrap that can overturn the canonical portrait.  There are profound presuppositional issues at play here.

For more in response to the new fragment:

James White of Alpha and Omega Ministries has written a few thoughts:  Get Ready for a Wave of Gnostic Looniness Once Again and A Note to the Secular Word: Do Your History

Michael Kruger (professor of NT at Reformed Theological Seminary) has written a brief statement with some links to some of his previous writings on similar topics-- The Gospel of Jesus' Wife: Authentic or Not?.  Also Dr. Kruger has an analysis of this new fragment over at the Gospel Coalition website entitled The Far Less Sensational Truth about Jesus' Wife.

Huffington Post is now carrying an article quoting a number of scholars who doubt the authenticity of the fragment.  Jesus' Wife Papyrus Authenticity Questioned by Scholars.

UPDATE: September 22, 2012  Be sure to see my follow-up post HERE which has a number of new links analyzing the fragment and the controversy.
Posted by Richard Klaus at 1:53 PM