As I finished up a brief three part sermon series on Acts 19 yesterday I attempted to bring out the apostle Paul's varying tactics and tone as he interacted with the idolatry of his time.  I borrowed (heavily) from Christopher J. H. Wright's book The Mission of God: Unlocking the Bible's Grand Narrative (IVP, 2006), pp. 179-182 in which he discusses the similarities and differences between Paul's discussion of idolatry to the church at Rome and his evangelistic practice in various pagan contexts.  A few selections from Wright:


Combatting idolatry can take many forms.  The Bible itself prepares us to recognize that different approaches may be relevant in different contexts.  Wisdom in mission calls us to be discerning and to recognize that what may be appropriate in one situation may not be so helpful in another. (p. 179)

Wright goes on to delineate four different aspects or contexts of the confrontation of idolatry:


1.  Theological argumentation as found in Romans chapter one.

3.  Pastoral guidance for dealing with the daily dilemmas of paganism such as eating meat that has been offered to idols (1 Corinthians 8-10).

4.  Prophetic warning and denunciation as found in the Old Testament prophets when they rebuked the people of God for compromising with idolatry.

In my sermon I focused on the first two: theological argumentation and evangelistic engagement.  In regards to Paul's theological engagement Wright has these words:


Writing to Christians, and speaking of idolatry objectively as a phenomenon, Paul pulls no punches.  In his sharp analysis of human rebellion against God in Romans 1:18-32, he sets idolatry firmly within the realm of that which incurs the wrath of God.  It is the result of deliberate suppression of the truth about God that is known and available to all humans.  It involves the inversion of the creation order, exchanging the worship of the living God for the worship of images of creation.  It claims wisdom but is rank folly.  It issues in a catalog of vice and viciousness, polluting every aspect of human life--sexual, social, familial and personal.  Idolatry is alienating, darkening, degrading, divisive and deadly.  We must not separate any part of this analysis from the whole.  Paul's attack on idolatry is theological, intellectual, spiritual, ethical and social.  It is a powerful piece of theological argument, preparatory to his exposition of the fullness of the gospel.  (pp. 179-180)


The monotheistic message of the gospel thus challenged popular superstition in Lystra, intellectual and civic pride in Athens and economic interests in Ephesus.  The thrust of Paul's evangelistic tactics in such circumstances--that is, when engaging directly with idol-worshipping pagans as distinct from offering theological teaching to established believers--is forthright and uncompromising but markedly softer and more polite than the language we observed in Romans 1.

He goes on to articulate some of the emphases of Paul's teaching to substantiate this point.


In the two recorded speeches (in Lystra and Athens), Paul emphasizes God as the one living Creator of heaven and earth (Acts 13:15; 17:24).  In both he stresses the providence of God in giving humans all the necessities of life, even life and breath itself (Acts 13:17; 17:25).  In Lystra he offers this as evidence of the kindness of God, bringing joy even to pagans; in  Athens he offers it as proof that God longs for people to seek him, though he is in fact not far from any of us (supporting this from pagan poetry [Acts 17:27-28]).  In both places, he allows that God has been patient and tolerant of pagan ignorance in the past (Acts 13:16; 17:30).  But in both he also calls for a decisive turning away from the worship of "worthless things" (Acts 13:15), which are hopelessly inadequate for the divine being (Acts 17:29).  This is consistent with his own testimony regarding the burden of his preaching in Thessalonica.  He recalls how pagans there had "turned to God from idols to serve the living and true God" (1 Thess 1:9).  In Athens, he goes on to speak of judgment and to link it to the resurrection of Christ (Acts 17:31).

What we learn from the lips of the pagans themselves in Ephesus is that Paul had argued that "man-made gods" are not gods at all (Acts 19:26--a thoroughly Old Testament perspective).  But what we also learn most interestingly is that Paul had not engaged in specific defamation of Artemis/Diana--the patron goddess of Ephesus.  This is not even a claim Paul makes for himself but is stated in his defense by the city clerk to pacify the riot fomented against Paul and his friends: "They have neither robbed temples nor blasphemed our goddess" (Acts 19:37).  Clearly Paul's evangelism was uncompromisingly effective but it was not calculatingly offensive.  (p. 181)

Following Wright's reasoning I put the following chart together:

I believe Wright's analysis can help us navigate the tricky waters of evangelistic encounters in our time. His distinction between theological argument and evangelistic engagement can help us make decisions regarding tactics and tone as we approach the world with the gospel.

For example, earlier this year Ruben Israel and his group of Street Preachers went to Dearborn, Michigan to demonstrate at the annual Arab Festival.  They went with signs, some of which read: "Islam is a religion of blood and murder" and "Muhammed is a...liar, false prophet, murderer, child molesting pervert."  They also took along a pig's head on a pole to "protect themselves" from any angry Muslims. 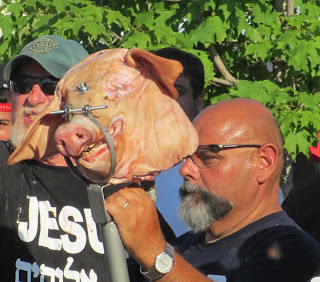 This is nothing new for Ruben.  He has dressed as a cow to preach to Hindus and he has waved Mormon underwear in front of the LDS Salt Lake City temple.  And, of course, whenever he is challenged on any of this he argues that he simply speaking the truth of God to people.  He attempts to claim the biblical high ground as he touts how courageous and masculine he is in his endeavors.  Paul's practice as outlined above gives a different way to judge the wisdom of Ruben's approach.  I would argue that Ruben and his cohorts are being "calculatingly offensive" in ways that are not helpful.  The apostle Paul's tone and tactics as illustrated in Acts show a different way.

It should be pointed out that simply having the above distinctions doesn't settle everything.  There will still, at times, be disagreements among Christians as to the best use of tactics in various evangelistic encounters.  Context is key.  To take another example, last year I went out with the Center for Bio-ethical Reform as part of their Genocide Awareness Project (GAP) that they conducted at Arizona State University.  This involved huge billboard signs with the graphic results of abortion with various signs of text seeking to awaken people to the realities of abortion.  Although this was not strictly evangelistic the principles still apply. 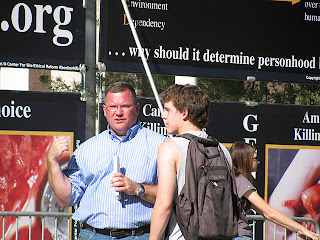 I know that there are those in the pro-life community that don't like this type of approach.  I support GAP on college and university campuses because it breaks the haze of apathy and slogans.  It allows for an opportunity for a (typically) younger generation that has not known a time without Roe v. Wade to see the reality of what is behind the euphemism of "pro-choice."  I had a number of civil conversations with students that were generated by the pictures.  This approach seems, to me, at least, something that is effective on a college campus in an arena stressing the open market place of ideas.  Having argued that these pictures have a place on college campuses doesn't entail that they are necessarily effective or ought to be used in other venues.  I've been involved with the local 40 Days for Life campaign and I would urge that a different tactic be used.  With 40 Days for Life the goal is to pray and be a presence in front of abortion providing facilities.  This is the last line of opportunity to speak to the women going inside.  I think a different message is needed here--one of compassion, concern, and urgency.  The pro-life message is not compromised.  I've seen some amazing examples of courageous women who engage in the side-walk counseling.  So the issue is not one of  compromise but one of wisdom.  Would the presence of graphic pictures be helpful in such a situation?  I don't think so.  Differing contexts require wisdom.  This is something we learn from Paul's ministry: to be uncompromisingly effective without being calculatingly offensive.

May God give us wisdom.
Posted by Richard Klaus at 3:41 PM