Jonathan Burnside has written a fascinating and major work on understanding biblical law and applying it to contemporary issues. 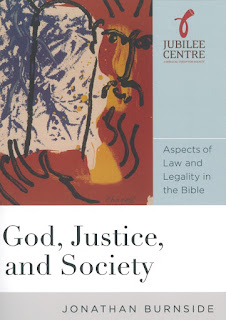 Dr. Burnside's book God, Justice, and Society: Aspects of Law and Legality in the Bible was honored with critical interaction in the journal Political Theology 14 (5) 2013.  I have not had the opportunity to review these essays but I did read Dr. Burnside's response "Words of Wisdom, Words of Prophecy: Why and How Biblical Law Speaks in the Public Square" and it has a number of important insights.

Here is one particularly good section on applying biblical law:

"One aspect of the problem of applying biblical law is the persistent tendency to view it in an‘all or nothing’ manner. It is assumed that if we are not advocating, say, the stoning of children – to use Nevader’s emotive example – I am being ‘inconsistent’ and so the game is up. But matters are hardly that simple.

"Take, for example, how lawyers interpret the law. Modern law consists of a wide range of material that is explicitly legal (including all manner of primary and secondary legislation) as well as (so the legal philosopher Ronald Dworkin would argue) material that is implicitly legal (e.g. values, principles and implicit assumptions). They are all part of ‘the law.’ For a Dworkinian lawyer it is all equally authoritative in the sense that it is all, equally, a resource which the judge (or any other legal interpreter) can draw on in reaching a legal decision. Butthat does not mean it all ‘applies’ to the instant case in exactly the same way. Far from it. In reaching a decision the judge is guided by considerations of consistency to the past and considerations of justice to create the most plausible and appealing account of the law that s/he can. A process of selection is going on with the result that not every element within the resources available to the judge will favour the final decision. But we do not thereby conclude that the judge has not ‘applied the law’ or that the process of application isarbitrary. This is because law consists of a whole body of discourse and thinking which guides the judge one way or the other in reaching a decision.

"Without advocating a Dworkinian reading of biblical law – for one thing, Dworkin can be criticised as subordinating legal texts to the morality of the individual judge – my general point is we should not assume that because we are not ‘applying’ one bit of biblical law (e.g.‘stoning children’) in one particular way (impliedly, in a literal manner) that we cannot speakof ‘applying’ any of it. This is not how modern law works and I do not think it is a sensible reading of biblical law either. We should see the whole of biblical law as a body of discourse and thinking that provides resources and direction for us in responding to current issues. At the same time we cannot, as it were, start with our preferred account of public policy (the free market over socialism, say) and then construct a biblical social vision to match. In this respect my approach differs from Dworkin inasmuch as I regard legal texts (in this case, biblical legal texts) as possessing more authority than Dworkin is prepared to admit. Our present ideas, of social justice or whatever they might be, are open to challenge by the biblical texts at every point. It goes without saying that certain texts are bound to speak in certain times and places far more sharply than others. There is hard thinking to be done and we have to be prepared for a potentially dangerous political stance.

"This means that the question of applying biblical law is not straightforward. It can’t simply be reduced to a matter of ‘what rules does the Bible have on this subject?’ or ‘what does the Bible expressly say?’ about this or that. Instead, it means drawing on and being aware of a host of contextual beliefs, values, narrative and worldview in which we are active participants, as McConville recognizes. It means recognising, as William P. Brown puts it, the “formative as well as normative, impact that Scripture qua Scripture makes upon reading communities” (emphasis original). If biblical law has a role to play in shaping basic worldview, values and identity then clearly this is not something that can suddenly be switched on when a moral dilemma presents itself. What is required, as Bruce C. Birch and Larry L. Rasmussen recognize, referring to the use of the Bible generally in ethics, is “long-term nurturing of the community of faith.” If the distinctive social vision of biblical law has not already been internalized it can hardly be drawn on appropriately or effectively in the face of a given social challenge. This underlines the need, once again, for biblical law to be widely known and understood (not least in our churches) so that it informs the worldview out of which reading communities seek to be salt and light in public life."

1.  Why do people always bring up the stoning of children as if that is a sure-fire way to show the absurdity of biblical law?  This law needs to be understood in its biblical contexts.  When this is done the law is not found to be crazy or absurd.  It may even have something to show us in terms of application for today.  See my study on this issue: The Penalty for Rebellious Children: What Does the Bible Say and What Does it Mean?

2.  The last paragraph cited above is most interesting to me.  Understanding how biblical law functions "means drawing on and being aware of a host of contextual beliefs, values, narrative and worldview in which we are active participants."  It is not simply a matter of looking up a few references or citing a specific piece of legislation divorced from the larger narrative context.  We must become attentive readers and active participants in seeking the wisdom of God to be manifested in all of our lives.  Burnside helpfully reminds us, "If biblical law has a role to play in shaping basic worldview, values and identity then clearly this is not something that can suddenly be switched on when moral dilemma presents itself."  Quoting Birch and Rasmussen, he notes the need for "long-term nurturing of the community of faith."  We need communities where the law of God is known, studied, and engagingly applied within a communal context.  This points up the need for teaching about and from the law of God.  "If the distinctive social vision of biblical law has not already been internalized it can hardly be drawn on appropriately or effectively in the face of a given social challenge."  If the community of faith has not internalized the law as set forth in the larger narrative structure of the Bible then how can the church effectively speak this law in a responsible and helpful manner into the cultural conflicts of our time?  Our ignorance of the law and our lack of internalized virtue stemming from deep communal meditation on it is one cause of our ineffectiveness in being "salt and light" to the world.
__________

For a few other posts in which I quote from Jonathan Burnside's God, Justice, and Society:

The Value & Insight of the "Old" Law Code in the Bible

Reading the Law within Narrative: Notes to a Muslim Student
Posted by Richard Klaus at 1:16 PM