After the fatal shootings in Dallas last week I ordered Heather Mac Donald's new book The War on Cops: How the New Attack on Law and Order Makes Everyone Less Safe. 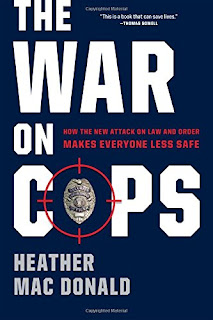 On Friday night (7/8) there was a protest in down town Phoenix.  This turned tense as the protester organizer Jarret Maupin changed the stated plans for the protest and threatened to lead the protestors on the a major high way to attempt to shut it down.  He changed his mind but the protestors were lead right up to the police line that was holding people from going onto the freeway.  There was some sporadic use of pepper spray by the police and Jarret Maupin soon lost control of the crowd.  The next day my copy of Mac Donald's book arrived and I was able to make my way half-way through it on Saturday afternoon.  The book has a number of interesting perspectives and facts but one especially stood out in light of the previous night's protest.  Chapter eight is entitled "The Riot Show" and she coins the phrase "riot porn" to describe what happens.  Here a few of her comments:


The riots held in the name of Freddie Gray, the drug dealer who died of a spinal injury in police custody, followed the drearily familiar script.  Upon the first outbreak of violence, a crush of reporters flock to the scene with barely suppressed cries of glee.  Surrounded by sound trucks and camera crews, outfitted with cell phones and mircophones, they breathlessly narrate each skirmish between police and looters for the viewing public, thrusting their microphones into the faces of spectators and thugs alike to get a "street" interpretation of the mayhem.  The studio anchors melodramatically caution the reporters to "stay safe," even though the press at times may outnumber looters as well as the police.  Meanwhile, the thieves get to indulge in the pleasures of anarchic annihilation while enjoying the desideratum of every reality-TV cast: a wide and devoted audience.

The performative quality of the live, televised race riot has created a new genre: riot porn, in which every act of thuggery is lasciviously filmed and parsed in real time for the benefit of at-home viewers.... The street scene at these televised riots can be eerily static.  People mill around listlessly like extras on a movie set.  Within the sea of idleness, more energetic thugs, perched on the roofs of police cruisers, stomp out the cars' windshields or throw garbage cans through the rear windows.  The smartphone camera has only magnified the specular nature of the anarchy, as passerby memorialize their own presence at the festival of lawlessness. (pp. 47-48--bold-face added)