* The following are some of my notes from my lectures on Just War theory for my Ethics & Moral Reasoning class.  This is more a work in progress.

·      “The classic just war doctrine as articulated by the Church does not view all use of force as evil; rather, it declares that war can actually be a positive act of love entirely consistent with the character of God.  Love of God and neighbor impels Christians to seek a just peace for all, especially for their neighbors, and military force is sometimes an appropriate means for seeking that peace.”[1]

·      “The version of just war theory we espouse takes seriously all of the obligations of its criteria, not in some minimal or negative checklist sense but rather along the lines of a discipline that involves commitments, duties, and virtues as well as categories, criteria, and principles.  In short, love for the enemy neighbor, along with their families and fellow citizens, is not to be suspended or set aside either during or after the war.”[2]

·      “Just war is not set in stone.  Composed of many theories, just war is a living tradition that has changed and continues to develop in light of new circumstances, technologies, and insights.  As John Howard Yoder, a Mennonite pacifist theologian who has written extensively on just war theory, observed, ‘It is appropriate to speak rather of “tradition” than of a “doctrine” or a “theory,” for there is not one official statement of this approach to which all would subscribe.’”[3]

Presumption Against Violence or Injustice?

·      “[T]he historical moral basis of just-war teaching is the presumption not against war or lethal force per se but against evil that is directed toward my neighbor, against injustice and oppression.  Just-war thinking, properly understood, begins with the presumption to restrain evil and protect the innocent, not to forbid coercive force.”[4]

·      “Without justice, peace itself can be illegitimate.  The animating spirit of just-war thinking is that ‘social charity comes to the aid of the oppressed.’  Therefore, anyone who categorically rules out the possibility of war or coercive force violates the presumption against injustice, which is a requirement of love rightly construed.  The just-war tradition, hence, strongly qualifies peace, acknowledging that if this peace is not justly ordered, it may well be illegitimate, even oppressive.  Peace, therefore, is not merely the absence of conflict.”[5]

Just War Theory as a Mediating Position Between Militarism and Pacifism 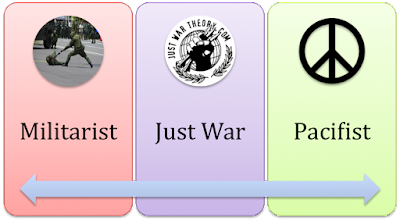 ·       “Properly understood, the just-war tradition understands itself as a mediating or moderating position between two poles that are absolutist in their attitude toward coercive force.  On the one hand, the militarist—whether secular (sometimes called the ‘political realist’) or religious (the jihadist or crusader)—views war and coercive force as justifiable under any circumstance.  No moral restraints beyond political expediency or the ‘command of God’ need be applied.  On the other end stands the pacifist.  Given the suffering and bloodshed caused by violence and war, the pure or principled pacifist believes that war and coercive force are never permissible; war is to be rejected under any and all circumstances.

“The just-war position—an expression of consensual Christian thinking through the ages—seeks to mediate this tension.  This mediating position is rooted in a certain Christian realism: we must never believe that nothing is permissible, nor that everything is.  There are occasions in which, reluctantly, we may need to apply coercive force, even if this means going to war, for the protection and preservation of a third party.  Resort to war is sometimes, though not always unjust.”[6]

o   Note on criteria à they are difficult to apply

“Just war theory, then, leads to valuable discussions about the ethics of war, but it is rarely if ever definitive.  Even its criteria are often problematic and difficult to apply in real situations.”[7]

§  Do all the criteria need to be met?

§  How stringently are the criteria followed?  Can one be overly scrupulous so that no war is ever justified—“just war pacifists”?

1.     Just cause.  War is seen as legitimate if it is waged in self-defense, to protect the innocent, in defense of human rights, or in response to acts of aggression.

2.     Competent authority and public declaration.  The use of force is permissible if a legitimate authority engages in due process and publically declares its intention to go to war.

3.     Comparative justice.  Meeting the just cause requirement does not grant carte blanche rights to any state; its objectives in war must be limited.  No party to war has absolute justice on its side.

4.     Right intention.  The only just motives for waging war are those prescribed by the just cause principle.  Ulterior motives (revenge, geopolitical power plays, seizing natural resources, and so on) cannot be rationalized within the just war tradition.

5.     Last resort.  This principle requires that all reasonable peaceful alternatives to war must be fully exhausted before going to war.

6.     Probability of success.  A war cannot be considered just if it will have no positive influence on the situation.  The intent is to prevent futile attempts to change a situation when one side has a substantial advantage or when engaging in conflict is the equivalent of mass suicide.

1.     Discrimination.  Soldiers must distinguish between combatants and noncombatants, and between military targets and the infrastructure necessary for life (water supplies, sewage treatment facilities, hospitals, crops, and so on).  The intentional targeting of civilians is never justified and is rightly condemned as murder.  The principle forbids all weapons that fail to discriminate between soldiers and civilians (including nuclear weapons and devices such as land mines).

2.     Proportionality (or mircoproportionality).  The use of military force must be proportionate to the objective.  This principle forbids all weapons of mass destruction (WMDs).

1.     Just cause principle.  “The goal of a just war must be to establish social, political, and economic conditions that are more stable, more just, and less prone to chaos than what existed prior to the fighting.  The just cause principle has three primary theoretical objectives: (1) hold parties accountable until mission is accomplished, (2) restrain parties from seeking additional gains, and (3) stem overly zealous post bellum responses.  In practice, this criterion entails both the return of unjust gains and the prohibition of unconditional surrenders.”

2.     Reconciliation.  “The goal of reconciliation is to transform a relationship of animosity, fear, and hatred into one of tolerance, if not respect, to turn enemies into friends and to bring emotional healing to the victims of war… This phase is not about cheap grace or taking a forgive-and-forget approach.  It involves acknowledgment of wrongdoing, admission of responsibility, punishment, forgiveness, and perhaps amnesty.  Ideally, reconciliation should lead to the return of the party to communion.  The goal of reconciliation, in short, is justice tempered by mercy.  In practice, the reconciliatory aims can be promoted through ceasefire agreements, restrained post war celebrations, public and transparent post war settlement processes, and apologies.”

3.     Punishment.  “Here the primary objectives are justice, accountability, and restitution.  The legitimacy of punishment depends on several factors: publicity and transparency (punishment ought to be meted out through public forums to which many, if not all, have access); proportionality and discrimination (appropriate punitive measures ought not to be excessively debilitating and must make distinctions based on level of command and culpability); and legitimate authority (punishments ought to be assigned by an authority that all sides recognize as legitimate).  In all likelihood, the legitimacy of the punishment phase depends on an independent authority (meaning a third party) in order to avoid even the appearance of victors acting as judge, jury, and executioner of the vanquished (which is otherwise pejoratively referred to as ‘victor’s justice’).  In practice, the punishment phase involves compensation (restitution) and war crimes trials.”

4.     Restoration.  “The goal of a just war is not simply the cessation of violence but political, economic, social, and ecological conditions that allow citizens to flourish.  In other words, a just war should seek to create an environment that permits citizens to pursue a life that is meaningful and dignified.  Doing so involves a number of practical concerns, including providing and establishing security, policing, and the rule of law; enabling sufficient political reform whereby a functional government can promote the common good and provide public services such as education, health care, and electricity; fostering economic recovery by helping with the transition from a post war to a peacetime economy; providing social rehabilitation for people who have been victimized by war and soldiers who may suffer from injuries and trauma; and ecological cleanup efforts to address the lingering pernicious effects of weapons such as cluster munitions on people’s lives and livelihoods.”

·      Question: Does the movement from self-defense to preventive war entail increasing obligations—epistemological probabilities and clarity of expression of intention?

a.     Preemptive war is a response to an imminent danger, a real and tangible threat.

2.     Active participation that turns that intent into a positive danger, a danger of being fatally exposed

3.     A situation in which doing nothing greatly magnifies the risk

b.     Many Just War theorists allow for preemption but not for preventive wars.[17]  For example, Daniel Heimbach argues, “Augustinian interpretation permits preemptive war responding to material threats actually offered, but can never allow stretching the just cause principle to justify wars of prevention.”[18]  J. Daryl Charles and Timothy J. Demy argue that preventive wars violate a number of the just war criteria:

Also, within jus ad bellum requirements, preventive war fails to meet the criterion of just cause in that it assumes a certain future breach of justice that has not yet occurred.  Further, it may also fail on limited aims depending on how far-reaching or global the threat is considered to be.[19]