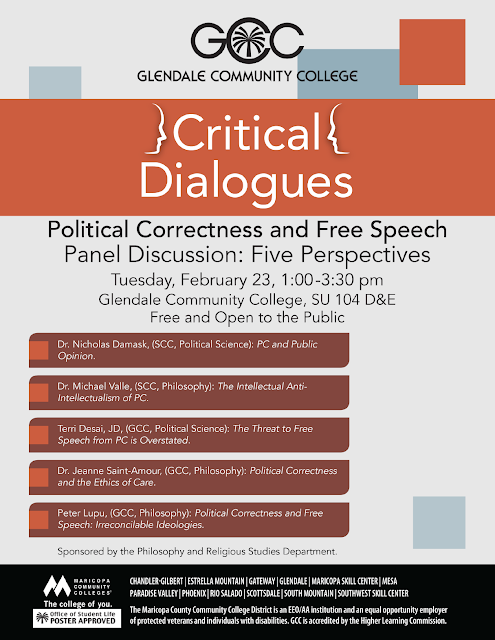 Here is an overview of the various presentations (in the order in which they presented):

Dr. Valle was strongly opposed to political correctness.  He had a short but informative power point presentation as he spoke of the intellectual currents in the history of thought that led to political correctness.  He spoke of how the "Frankfurt School" was influential in espousing Marxist theory under the guise of "social criticism."  He traced this intellectual current into the work of Herbert Marcuse who, at the time of his ascendancy, was considered the "guru of the left."  Dr. Valle ended his presentation with a list of a number of problems with political correctness:

1.  It is humorless.
2.  It conflates the notions of good/evil (or right/wrong) with power plays between those with power and underdogs.  In so doing, political correctness creates moral confusion.
3.  It tends to look at motives (which are notoriously difficult to assess) rather than engaging reasoned arguments.
4.  It is paternalistic.
5.  It is fundamentally inconsistent in that it promotes moral relativism but then turns around and uses objective criteria to judge others.

Dr. Desai was not impressed with the need to battle political correctness.  She noted that the phrase "political correctness" was itself derogatory.  A misplaced focus on battling about political correctness was a distraction from dealing with real problems.  She took up three particular areas where critics of political correctness focus: politically correct terminology, micro-aggressions, and trigger warnings/"safe places."  In all these specific instances she rhetorically asked what the problem was with these ideas.  She argued that many times political correctness comes to expression in policies and procedures that seek to bring a marginalized segment of society a bit more tolerance given the power differentials.  Marginalized people are seeking the power to define themselves.

Reflections on the presentations and the question/answer period that followed:

1)  I found Dr. Valle's and professor Lupu's presentations to be the most thought-provoking and informative.  Their ability to connect the current cultural expressions of political correctness to its ideological origins was helpful.

2)  I did detect a bit of "speaking past each other" by the various panelists.  During the question and answer time I brought this up.  I noted the disconnect and offered an explanation as to why this might be the case.  I noted that Dr. Saint-Amour was largely speaking about the interpersonal dimension when she spoke of the altruism of an ethics of caring.  On the other hand, Dr. Damask was concerned with larger cultural forces that tend to silence viewpoints.  I also mentioned the category of the judicial wherein certain kinds of legislation revolving around hate speech are enforced to one's legal detriment.  In light of these three distinct categories--interpersonal, cultural, and judicial--there was, at times, a failure to connect in that not everyone was speaking about the same domain.

3) I also asked Dr. Desai, as a lawyer, what she thought of "hate speech legislation."  She was not as alarmed by it as others and noted that there have laws for a long time that seek to punish more harshly due to one's motivations.  She cited the examples of killing a police officer or harming a child.  These crimes are punished in a more thorough way.  I was unable to follow up but these examples do not necessarily show that motivations are under harsher scrutiny in these cases.  Rather, I would argue, it is the object of the attack in these cases that merits the harsher punishment.

4)  Now to the most interesting and explosive moments of the discussion.  Dr. Damask made a comment that those who make statements about radical Christianity being as dangerous as radical Islam are simply not in touch with the empirical facts today.  In response, Dr. Saint-Amour took up the challenge and argued that, indeed, radical Christianity was just as dangerous as radical Islam.  She went to rail against Christianity's promotion of the forced sterilization of Native American women.  At this point, from my seat in the second row, I shouted out a question: "Could you provide documentation of a Christian denomination advocating for such practices today in an analogous manner to which the Wahhabi strain of Islam (a movement provided with institutional support by the Saudi government) supports and undergirds elements of radical jihadism?"  In response to this she made a vague reference to an undefined Baptist church and a Methodist church.

Aftermath... the next day.  I was not satisfied with Dr. Saint-Amour's answer so I emailed her the next day the following inquiry:

I was at the recent "Critical Dialogues" regarding Political Correctness and Free Speech.  During your comments in response to Dr. Damask you remarked that radical Christianity is just as dangerous as radical Islam.  You spoke about the Christian religion's endorsement of forced sterilization of Native American women.  I asked if you could provide documentation of a Christian denomination advocating for such practices in an analogous manner to which the Wahhabi strain of Islam ( a movement provided with institutional support by the Saudi government) supports and undergirds elements of radical jihadism.  You vaguely mentioned a Baptist and Methodist church.

Thank you for you time.

Dr. Saint-Amour responded to this email and suggested I do some research on Google to see the facts of the matter.  To this I responded with a follow-up email:

Thank you for your quick reply.  Prior to emailing you I did precisely the kind of internet research that you suggest.  I did find documentation of forced sterilization of Native Americans in the 1970's.  I came across the General Accounting Office (GAO) report detailing such atrocities.  I also came across an article on the The Center for Bioethics and Human Dignity website entitled "Forced Sterilization of Native Americans: Late Twentieth Century Physician Cooperation with National Eugenics Policies."   In part this article states:

"What may be the most disturbing aspect of the investigations followed: it was physicians and healthcare professionals in the IHS who coerced these women. It was they who abandoned their professional responsibility to protect the vulnerable through appropriate, non-eugenic indications for surgery and informed consent prior to the procedures."

You will recall, however, that my question dealt with your claim that "radical Christianity" was just as bad as "radical Islam."  You brought up the allegation of Christians promoting the forced sterilization of Native Americans.  I asked if you could provide documentation of a Christian denomination advocating for such practices in an analogous manner to which the Wahhabi strain of Islam ( a movement provided with institutional support by the Saudi government) supports and undergirds elements of radical jihadism.  You vaguely mentioned a Baptist and Methodist church.

Again, thank you for you time and attention to these matters.

Dr. Saint-Amour and I traded a few more emails.  She alleged that all the doctors who had engaged in forced sterilizations of Native American women were Christians--another allegation without documentation.  Furthermore, when pressed to point to a specific radical Christian group attempting to force others to be like themselves through physicians and governmental agencies she named the Texas Tea Party.  I found this less than convincing.  Overall our exchanges were civil but I still never got any documentation on the claim of Christian motivated sterilization of Native American women.

At the end of it all the GCC Critical Dialogues were a success.  An important topic for our cultural and campus life was discussed in a civil manner.  The free-flow of ideas took place and I think all were forced to think and reason afresh on political correctness.
Posted by Richard Klaus at 2:48 PM