Our elder board read through John Dickerson's The Great Evangelical Recession as an exercise to help us to discern the times in which we live and minister.  I put together a brief overview of the first half of the book in which Dickerson's outlines a number of negative trends besetting the evangelical church. 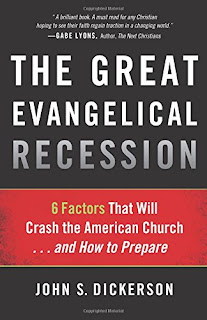 o   Dickerson outlines and overviews six trends that are negatively impacting the evangelical church and will, in all likelihood, continue to do so for the foreseeable future. 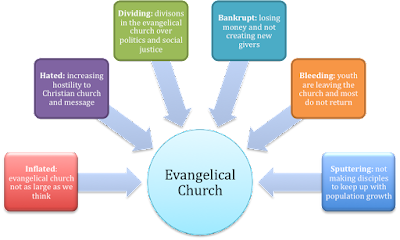 “What follows is not depressing.  It simply tests our loyalty.
While confronting these facts, we will be forced to answer, again and again,
‘Am I more committed to evangelicalism as we know it,
or to Jesus Christ, His kingdom, and His message?’” (p. 17)

o   This is a profound question and takes on even more relevance for us if we substitute “Northminster Presbyterian Church” for “evangelicalism” in the above quotation.

c.      “If the generational changes examined in the upcoming chapters persist, evangelicals could drop to about 4 percent of the population within three decades.  That is, in just under thirty years, we may only be 16 million of about 400 million Americans.  That’s one in every twenty-five Americans.” (p. 33)

a.     There is an increasing hostility and marginalization of Christians and the Christian message in the larger culture

i.     “The broader ‘host’ culture of the United States is changing faster than most of us realize.

ii.     “The direction of that change includes pro-homosexuality and anti-Christian reactionism.

iii.     “The rate of cultural change in this direction will further accelerate as the oldest two generations die, taking their traditional ‘American values’ and votes with them.

iv.     “These changes will reach a point at which they directly affect church as we know it and our lives as individual Christians.” (p. 41)

c.      “Right now, evangelicals account for a minority of the United States population.  But a giant-chunk of Americans, most people over the age of fifty-five, still see life through a quasi-Christian lens.  They are the non-evangelicals who grew up in Sunday schools of the 1940s to early ‘60s.  Even if their parents weren’t some sort of Christian, their friends or neighbors or teachers were.  They still had prayer in their schools.  Intentional or not, they are the dam holding traditional American values in place.” (p. 46)

d.     “For the next fifteen to twenty years, we will see continued conservative resistance to the tides of pro-homosexuality and anti-Christian prejudice.  With each passing year, however, the resistance will seem weaker and weaker.  It will seem more desperate and less relevant, because it will be.

“The Americans who feel so strongly about these values are literally dying off and disappearing.  In a big sense, their traditional American values will die with them.  Even among Bible-believing evangelicals, the younger generations do not universally embrace these national cultural battles as their calling.

At some point in the next twenty years, probably sooner, the culture will turn a corner—at which point the same-sex marriage debates will be firmly decided among the supermajority of Americans.” (p. 57)

a.     The disparate ages of evangelicals reflect a differing conception over politics.

b.     “The precise evangelical focus on the gospel has been lost in the muddy waters of politics, culture wars, and progressive theology.” (p. 65)

c.      The younger, up-coming generation of evangelicals is more interesting in social justice issues on the international scene (e.g., sex-slave trafficking) than in traditional American culture war issues from the conservative side.

d.     There is the growth of non-white evangelicals that must be taken into account.

e.     “The divisions we’re seeing today result from radically conflicting answers to the same question: ‘How do we respond to the changing culture?’  The question will become increasingly difficult to answer as the culture continues its accelerating change.

“In simple, broad strokes, here’s what we are already seeing and can likely expect to continue seeing: Younger, coastal, highly educated, and metropolitan evangelicals feel more and more strongly that we should abandon political rhetoric and elevate the gospel by focusing on Jesus’ message to a post-Christian culture that is not home.  They see the marriage of Jesus and the American flag as a pollution of Christ, as nationalistic static and extra noise that distracts from Jesus and His kingdom.

“At the same time, frightened by changes in United States culture, middle-American, Bible-belt, suburban, and older evangelicals feel more and more strongly that we need to ‘defend’ our rights in ‘our Christian nation.’  They believe that we and our elected officials are called to hold back the tide of spiritual darkness through political influence.  They see the increasingly hostile host culture as a reason for further political activism, not less.

“These groups will split further and further apart as the culture continues changing.  Their reactionary distancing will continue, because they have differing foundational views about two emotionally charged issues.  First, they strongly disagree about America’s present status as a Christian nation.  They also have conflicting foundational views about Christ’s methods and means for redeeming a culture—whether human government is central to God’s plan today or peripheral to it.” (pp. 76-77)

a.     The evangelical church is losing money and not creating new givers.

c.      “By multiple accounts, American evangelical donations are on course to drop by almost half in the next fourteen years and by two-thirds in the next thirty years.” (p. 90)

d.     “Folks over age 75 give four times as much of their income as 25-44-year olds, according to The State of Church Giving Through 2009.  Each younger generation gives significantly less of its income to ministry.” (p. 90) 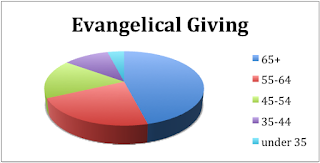 e.     “These figures show that as the current 45- to 54 –year olds become the older generation, there will still be some vitality of giving (particularly as they inherit their parents’ wealth).  But unless those under the age 44 change their values as they age, the evangelical juggernaut will crumble as the younger generations inherit their parents’ and grandparents’ $41 trillion in wealth.” (p. 92)

a.     Youth are leaving the evangelical church in their 20s and a majority of them never return.

b.     Half of those born into evangelicalism leave in their 20s and 65% do not return.

c.      “Of the 3.7 million United States evangelicals who are eighteen to twenty-nine years old, 2.6 million will leave the faith at some point between their eighteenth  and twenty-ninth birthdays.  That’s 260,000 who leave each year. That’s 712 who will quit the faith today, another 712 tomorrow, and so forth.” (p. 103)

e.     “If this rate of departure continues to the next generation of 18-29-year olds (and the evidence indicates it will), then about 5 million people will have left the United States church between the years 2007 and 2027.  That’s 5 million departed from a church of about 22 million.  About 3.4 million of them will never return.” (p. 104)

a.     The evangelical church is not making disciples to keep up with population growth.