I've started reading through Is Goodness without God Good Enough? A Debate on Faith, Secularism, and Ethics.  The first part of the book is the contents of a debate between Christian philosopher William Lane Craig and Paul Kurtz who is a proponent of "secular humanism."  This is followed by respondents to the debate from various backgrounds. 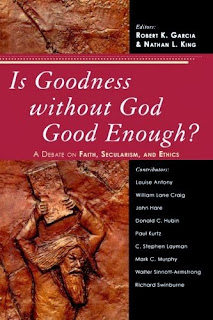 Chapter two is by C. Stephen Layman and is entitled "A Moral Argument for the Existence of God."  I will not summarize Layman's argument here.  Rather, I wanted to quote an interesting section regarding reincarnation.  Some people may wish to deny the existence of God and yet hold to some sort of objective moral ethic.  One way of doing this is to affirm a moral universe governed by karma.  Sometimes this is held in a sort of "street-level," non-sophisticated manner--"I don't believe in God; I believe in karma."  Layman's comments should cause pause to any who wish to ground their ethic in karma while simultaneously denying the existence of a personal God.

However, given that reincarnation and karma hold in the absence of any deity, the universe  is governed not only by physical laws (such as the law of gravity) but by impersonal moral laws.  These moral laws must be quite complex, for they have to regulate the connection between each soul's moral record in one life and that soul's total circumstances in its next life, including which body it has, its environment, and the degree of happiness (or misery) it experiences.  Thus, these impersonal moral laws must somehow take into account every act, every intention, and every choice of every moral agent and ensure that the agent receives nothing less than his or her just deserts in the next life.  Now, the degree of complexity involved here is obviously very high, and it serves a moral end, namely, justice.  But a highly complex structure that promotes justice can hardly be accepted as a brute fact.  Such a moral order cries out for explanation in terms of intelligent cause.  And if the moral order is on a scale far surpassing what can reasonably be attributed to human intelligence, an appeal to divine intelligence is justified.  Hence, the moral order postulated by nontheistic reincarnation paradoxically provides evidence for the existence of a personal God.  (pp. 58-59)


See the related post: Reincarnation: Letter to a Co-worker.
Posted by Richard Klaus at 4:49 PM