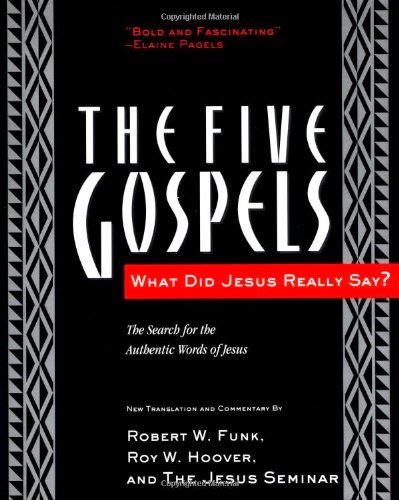 The hey-day of the "Jesus Seminar" was from the mid-1980's to the early 1990's.  In my Apologetics and Worldview class I lectured on the Jesus Seminar.  The students had to read Craig Blomberg's essay critically interacting with the Jesus Seminar: The Seventy-four "Scholars": Who Does the Jesus Seminar Really Speak For?  Even though the Jesus Seminar is not the head-line grabbing entity it once was Blomberg's essay is worth reading in that he mentions a number of assumptions used by much of non-evangelical scholarship that should be challenged.  One of these concerns the fluidity of the oral history between the time of Jesus and the first written Gospels.  I explained this in class today and mentioned the work of Paul Rhodes Eddy and Gregory A. Boyd The Jesus Legend: A Case for the Historical Reliability of the Synoptic Jesus Tradition which looks at this issue. 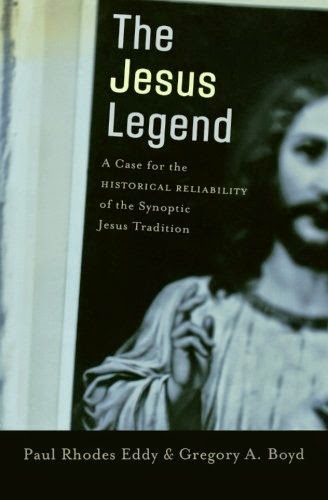 i.     O1: In the oral transmission of Jesus’ words, his disciples remembered only the core or gist of his sayings and parables, not his precise words.

ii.     O2: The bedrock of the sayings tradition is made up of single aphorisms and parables that once circulated independently.

iii.     O3: The simpler forms of sayings and parables are more likely to be original with Jesus.

iv.     O4: Hard sayings are frequently softened in the process of transmission to adapt them to the conditions of daily living.

v.     O5: Words are frequently borrowed from the fund of common lore or from the Old Testament and put on the lips of Jesus.

c.      Another list of criteria mentioned by Paul Rhodes Eddy and Gregory A. Boyd:[2]

i.     The assumption of a purely oral period

ii.     The assumed lack of a coherent narrative

i.     “…all the words attributed to Jesus are context-bound (N2) and so cannot be used to determine what Jesus said.”[3]

ii.     N2: Quoted speech that is entirely context-bound is probably the product of the storyteller.[4]

i.     “Since these predictions mirror the ‘proclamation’ (Greek: kerygma) of the primitive church and accord with Mark’s conception of his narrative (W4, W8a), most scholars regard all three as composed by Mark after the events to which they refer (W10).”[5]

ii.     W4: The evangelists frequently compose or revise and edit both sayings and narrative contexts to make them conform to their own individual language, style, or viewpoint, or to make saying and context conform to each other.[6]

iii.     W8a: Sayings and parables expressed in “Christian “ language are the creation of the evangelists or the oral tradition before them.[7]

iv.     W10: Sayings and narratives that reflect knowledge of events that took place after Jesus’ death are the creation of the evangelists or the oral tradition before them.[8]

a.     “Though the authors regularly refer to oral cultures, the only actual examples they give come from a very non-oral culture, that of their own modern Western world.”[9]

b.     “The theory that sayings, aphorisms, memorable oneliners, and sometimes parables are the things that survive, whereas stories about Jesus, with his words embedded within them, do not, is clearly promulgated with one eye on the results.  ‘It is highly probable,’ we are told—this, recall, at the introductory level, before we have examined a single saying!—that the earliest layer of the gospel tradition was made up almost entirely of single aphorisms and parables that circulated by word of mouth, without narrative context—precisely as that tradition is recorded in ‘Q’ and Thomas.

“With the evidence thus well and truly cooked in advance, it is not surprising that the portrait of Jesus-the-quizzical-sage ‘emerges’ from the subsequent discussion.  It could not help doing so.  The theory about what sort of material survives in oral tradition, I suggest, was designed to produce exactly this result.

“Against this whole line of thought we must set the serious study of genuinely oral traditions that has gone on in various quarters.  Communities that live in an oral culture tend to be storytelling communities.  They sit around in long evenings telling and listening to stories—the same stories, over and over again.  Such stories, especially when they are involved with memorable happenings that have determined in some way the existence and life of the particular group in question, acquire a fairly fixed form, down to precise phraseology (in narrative as well as in recorded speech), extremely early in their life—often within a day or so of the original incident taking place.  They retain that form, and phraseology, as long as they are told.  Each village and community has its recognized storytellers, the accredited bearers of its traditions; but the whole community knows the stories by heart, and if the teller varies even the slightly they will let him know in no uncertain terms.  This matters quite a lot in cultures where, to this day, the desire to avoid ‘shame’ is a powerful motivation.”[10]

c.      “Early form critics such as Bultmann took it for granted that folk traditions consisted almost exclusively of short vignettes.  How could longer narratives, to say nothing of epics, be remembered and transmitted intact orally?  While this view is still prevalent today among many in New Testament circles, a significant number of folklorists, anthropologists, and ethnographers over the last several decades have justifiably abandoned it.  The reason for this reversal is that empirical evidence has shown it to be demonstrably wrong.  A large number of fieldwork studies have ‘brought to light numerous long oral epics in the living traditions of Central Asia, India, Africa, and Oceania, for example.’  Hence, as the famed Finnish folklorist Lauri Honko recently noted: ‘The existence of genuine long oral epics can no longer be denied.’  In fact, amazingly, scholars have documented oral narratives whose performance lasted up to twenty-five hours carried out over several days.”[11]

d.     “If the oral period of the early church functioned similar to the way we now know oral communities tend to operate, we should expect that those individuals who were closest to Jesus during his ministry would have played a significant role in the transmission of oral material about Jesus.  This does not in any way deny that the material was, to some extent, shaped by the needs of the early faith communities, for as we have seen oral tradents always shape their performances according to the particular situation of the audience.  But it does at the very least mean that we would expect to see this material being transmitted by, among other ‘strong tradition bearers,’ eyewitnesses from among the original followers of Jesus.  And this makes it much more difficult to suppose that the oral Jesus tradition acquired a significant amount of fictionalized material in the process of transmission during the several decades prior to the writing of the Gospels.”[12]

e.     “The Jesus constructed by the Jesus Seminar is a talking head whose teachings bear no intelligible relation to his death on a cross.  If Jesus said only the sorts of things judged authentic by the Seminar, it is very difficult to see how he could have been mistaken by Jewish and Roman authorities as a messianic pretender who needed to be executed.”[13]