My family and I spent about two hours waiting for chicken sandwiches today at Chick-Fil-A--and it was worth it!  This, of course, was the day set to show support to Chick-Fil-A for their president's (Dan Cathy) remarks about marriage.  Some news organizations and blogs are speaking of this as a "protest."  It wasn't a protest.  I saw no signs.  I heard no angry speeches.  There were just hundreds of people lined up outside in the hot Phoenix sun waiting patiently to order food.  It was a largely symbolic gesture but nonetheless an important gesture.  This will not turn the "cultural war" but it was a public act by large segments of the community.  It spoke a number of messages.  It spoke about the public's stance on marriage--Dan Cathy's position of one man, one woman faithfully committed together is a view point shared by a large number of people.  It spoke about the freedom of religious expression.  There were those elected officials who sought to threaten Chick-Fil-A with economic sanctions because Dan Cathy expressed his thoughts on a social issue in the public square of ideas.  The appreciation expressed today was a reminder that the traditional view of marriage is not marginal and will not be marginalized.

Here are a few pictures of our time at a Northwest Phoenix Chick-Fil-A: 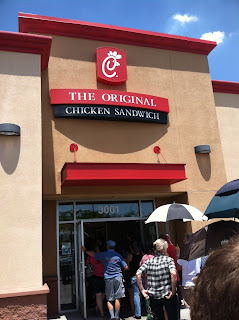 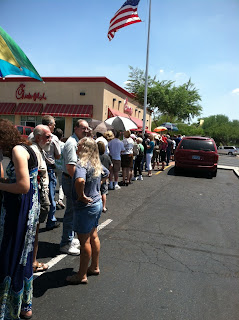 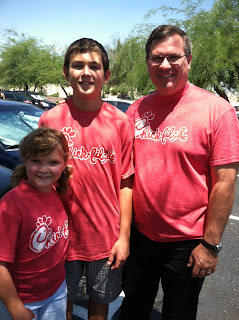 Posted by Richard Klaus at 3:33 PM